by By Aaron Swink Special Contributor 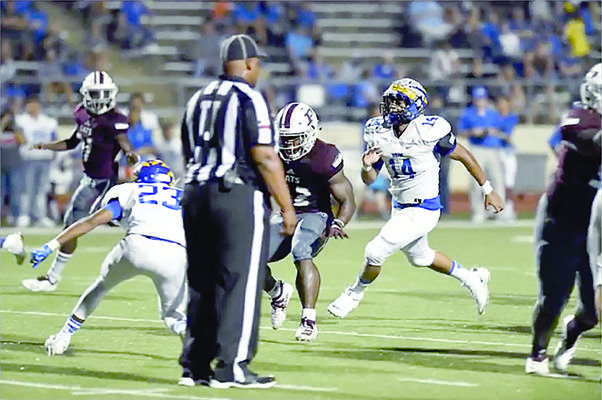 The 83rd all-time meeting between the Jacksonville Fightin’ Indians and the Palestine Wildcats was one for the history books.

The game had everything fans would expect from high school football in 2019: emotion, pageantry, momentum swings and plenty of scoring. The contest at Wildcat stadium also showcased an element most wouldn’t think of in this era of football: the home team’s Wing-T run-based offense reminiscent of the 1970s.

When the dust settled, the Tribe emerged victorious for the first time in 2019, stunning the Maroon and White, 49-48, after trailing by three scores at halftime in a matchup well worth the price of admission.

The Tribe took the game’s opening kickoff and matriculated the ball down the field with a balance attack before senior running back Aaron Richardson cashed in from two yards out to put the visitors on the board first and for the first time this season. Senior kicker Alejandro Pina-Sanchez added the extra point at the 7:48 mark of the first quarter.

Palestine’s first drive, like the majority of their attack all game long, was exclusively focused on the running game. Head coach Lance Angel signaled his intent to keep the Tribe defense guessing by deploying a stable of running backs all with similar size, speed, and shiftiness. Jeremiah Davis sprinted 54 yards to put the first PHS points on the board midway through the opening stanza. With the PAT, the teams found themselves locked in what seemed at the time to be a tight battle.

Jacksonville’s second drive would give Indian fans a glimpse of things to come as senior wideout and University of Colorado commit Chris Carpenter showcased his hands and his blazing speed by hauling in a pass from junior QB Patrick Clater and taking it 69 yards for the score. Pina-Sanchez was true on the point after attempt and the Highway 79 Rivalry looked, for all intents and purposes, to be a back-and-forth affair.

The Wildcats controlled the ball and the clock for basically the remainder of the first quarter before Jakerian Conley found the endzone from nine yards out to cap a methodical scoring drive. Another converted PAT levelled the score at 14-all as the teams switched ends of the field.

Clater found another of his favorite targets, Jaylon Freeney, for a ten-yard scoring strike just over a minute into the second quarter. Another solid PAT kick saw the Tribe edge back in front.

Conley found paydirt next for the home team and Luke James booted true to tie things up again with 8:13 to go until halftime. The next eight minutes would change the trajectory of the contest from competitive to crazy.

One a fourth down and nine, Carpenter seemed to have grabbed his second score of the evening – taking a laser of a pass on a slant route and dashing 58 yards for the score. Inexplicably the huge play was called back for an ineligible man downfield call against Jacksonville. Rather than celebrate a touchdown, Carpenter was forced to punt and the Wildcats seized all momentum for the rest of the half.

Davis got in on the scoring twice more before the buzzer sounded. He was joined by Marquis Thompson, who took a rare Christian Hutchinson pass 38 yards for a score. Luke James would miss a PAT just before the half, but the damage was done with Palestine seemingly in control 41-21.

The Tribe came out of the locker room resolved to battle all the way back, as evidenced by recovering an onside kick to begin the third quarter. Clater found Carpenter again and the score counted this time. The Tribe sat within striking distance once again.

After a second recovered onside kick failed to yield points, the JHS defense stepped up to get the ball back with no damage done. Richardson added the spark this time – going 15 yards for a touchdown. Despite a rare Pina-Sanchez miss, the Tribe had the ‘Cats in their sights at 41-34 with 4:33 left in the third.

Richardson, a leader among this senior class, took matters into his own hands by bruising the Wildcat defense with two one-yard scoring dives. Pina-Sanchez found his form on the first. The second and final Tribe TD was followed up by the most exciting moment in a breathless game. Trailing 48-47 with 7:42 remaining, JHS head coach Wayne Coleman called for a two-point conversion. Clater bought his receivers time until junior Kasey Canady was able to get free on a crossing route and haul in the go-ahead points.

The Fightin’ Indian defense stood firm for the rest of the game and sent the visiting fans back across the Neches River happy.

The Indians will look to keep their momentum rolling as they welcome the Henderson Lions to the historic Tomato Bowl for Homecoming on Friday night.