Pep talk from an Olympian: Alto youth, ISD get visit from gold medalist 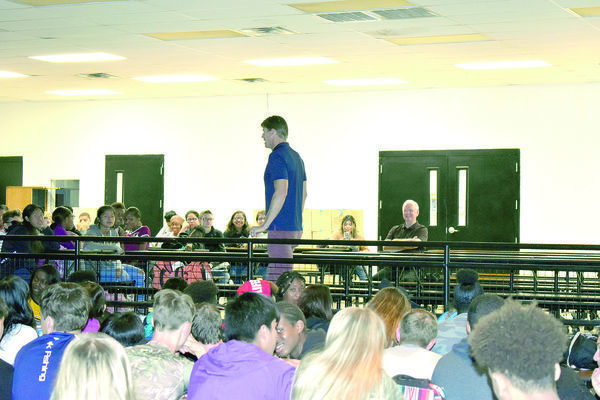 Photos by Josie Fox Josh Davis speaks to Alto students on Aug. 28 prior to touring the campus. Davis, a gold medal Olympian and motivational speaker, talked to the students about perseverance and determination. 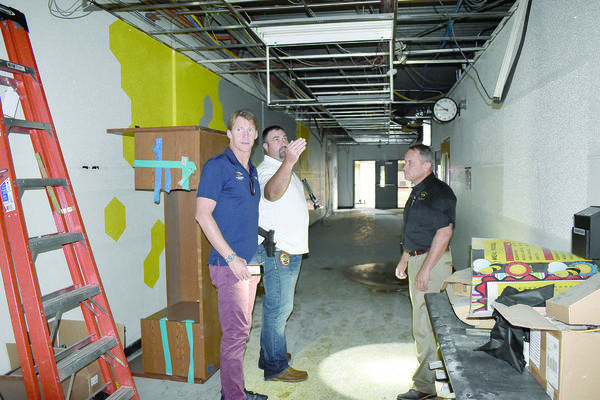 Davis, who now travels as a motivational speaker, was invited to speak to the youth of Alto First Baptist Church and got the chance to speak to numerous children at AISD during a tour of the campus he took on Wednesday, Aug. 28.

“He spoke to our band students, athletes and our Middle School students while he was here,” AISD Superintendent Kelly West said. “We appreciate the First Baptist Church is making him available to speak to our students. They’ve really stepped up and gone above and beyond the call of duty in helping the district since the storms hit. He brought a great message to our kids – how he used perseverance to overcome obstacles in his own life to succeed.”

Davis made history in 1996 by becoming the only man in any sport from any nation at the Atlanta Olympic Games to win three gold medals.

“With a passion for representing our country, Josh returned to the Olympics in Sydney in 2000 where he was elected captain of the USA Men’s swim team,” Davis’ website states. “He went on to break the American record three times in his event the 200 meter free-style and won two silver medals at the 2000 Sydney Games.

“After two Olympics and five medals, Josh has established himself as ambassador for the sport of swimming and is pioneering the road for the next generation of professional swimmers.”

Married with four children, the San Antonio resident now speaks to hundreds of schools and faith-based organizations all over the U.S., sharing his Olympic medals and messages about abstinence, good life choices and the importance of family in America.

“My goal is to inspire as many … kids as possible,” Davis said in a release published on his website. “My hope is that every young person realizes that if this San Antonio boy can become one of the best in the world at something then they can, too!”

Davis’ message of perseverance could not have come at a more opportune time for the district, too. Several buildings on campus were damaged during a spate of tornadoes that swept through Alto on April 13. The weather continued to play havoc on AISD on Aug. 28, when storms caused some leaking in the district’s remaining buildings.

“Some school buildings have experienced flooding and water leaks,” district officials posted on Facebook last week. “AISD administration and staff have worked tirelessly all morning to ensure that students have a safe, dry place to learn.

“As AISD is still awaiting funds from its insurance company related to the hail/tornado claims from spring 2019, many of our facilities have not been fully restored to a condition that is able to withstand such weather. “This is not due to the negligence of our vendors, or the failure of AISD to pay for the repair projects; rather, the insurance company has not remitted the necessary funds for needed repairs. AISD has been forced to borrow over $3 million to ensure that our vendors are receiving payment for their existing work. Incurring additional debt necessary to fully complete all projects could compromise the District’s financial health, especially in light of the additional funding that is still anticipated from our insurance carrier. With that said, the safety and comfort of our students and staff is our utmost priority and District administration will continue to work toward solutions that will enable classes to continue uninterrupted.

“We would like to thank our students for continuing to rise to whatever challenge we are faced with, our staff for their unwavering dedication, and our parents for their continued understanding of the weight of every decision that has to be made.

“We can’t describe our gratitude for this community’s support through an extremely trying time for our district.”