by Cristin Parker cristin@thecherokeean.com Thanks 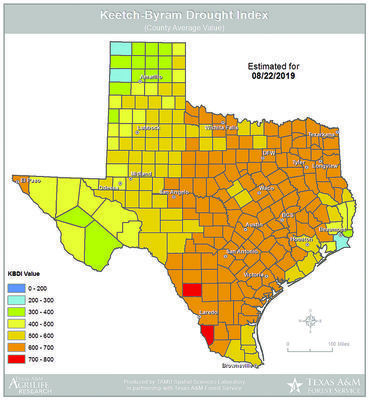 to the heavy rains that blew through the area in the springtime this year, Cherokee County hasn’t experienced much in the way of drought conditions this summer – until now.

Cherokee County’s not under a burn ban yet, but as of Tuesday, Aug. 27, two adjacent counties – Rusk and Henderson -- have instituted their own burn bans.

“I monitor daily the Texas forest service reports,” County Judge Chris Davis said Tuesday. “I talk to the Forest Service and the fire departments and gauge how many fires there’s been and talk to them. We’ve all got open communications on this.

“We’ve been getting rain in different spots in the county. Some places are green. It’s difficult with a long narrow county like ours, but I’ll be talking to the Forest Service after a while to get more input from them and the fire departments. I don’t think we’ve had an abnormally bunch of fires.

“People, when they see the other counties [issue burn bans], then they think, ‘Oh, why aren’t you?” Well, I don’t know what they’re using to determine their burn ban, but we’re trying to use Forest Service all the way.”

Cherokee County Emergency Management Coordinator Sergio Servin added, “Our region is still under the moderate risk of the spread of wildfires due to the high humidity we are currently experiencing. We will continue to keep a close eye out in any changes that may impact this situation.

“For all citizens, we ask that people use good judgement when burning. Keep in mind all aspects, dry grass, wind, and any nearby structures. Also, please do not leave any fires unattended for any period of time. They must be supervised, as fires can spread very quickly. If it is not an absolute necessity, just don’t burn at all. Save it for a better day.”

The National Integrated Drought Information System’s U.S. Drought Monitor, as found at the website, drought.gov, reported late last week, in East Texas, “abnormally dry conditions (D0) were expanded across much of the area. Reported rainfall in areas was only 20 percent of normal.”

Currently, 135 Texas counties are under burn bans – the majority in west and central Texas.

As of Aug. 20, 3,456,000 Texas residents, or 14 percent of the state’s population, were living in drought conditions. A total 14,023,000 residents – including those in Cherokee County -- are experiencing abnormally dry conditions.

“The state of Texas will do whatever is necessary to ensure local officials have the resources they need to respond to these drought conditions,” Abbott said. “I urge all Texans … to take necessary precautions and follow the guidance of local officials.”

As of Aug. 22, Cherokee County’s Keetch-Byram Drought Index (KBDI) average was 663.63. The KBDI is an index used to determining forest fire potential, according to the Texas Weather Connection website, twc.tamu.edu.

“The drought index is based on a daily water balance, where a drought factor is balanced with precipitation and soil moisture (assumed to have a maximum storage capacity of eight inches) and is expressed in hundredths of an inch of soil moisture depletion,” the website states.

The drought index ranges from 0 to 800 – with 0 representing no moisture depletion, and 800 representing absolutely dry conditions – and is derived from ground based estimates of temperature and precipitation data collected from weather stations and calculated manually by experts at the Texas Forest Service (TFS) for counties across the state.

Often underestimated due to its slow onset, drought stands as the second most costly natural hazard in the U.S.

According to the U.S. Billion-Dollar Weather and Climate Disasters report, generated at NOAA’s National Centers for Environmental Information (NCEI), “26 drought events between 1980 and 2018 caused specific losses over $1 billion, resulting in $244.3 billion in direct damages from those events alone. This does not include numerous drought events with losses under $1 billion as well as indirect impact of drought to the economy.

“Second only to tropical cyclones, drought affects agriculture, water supply, energy, wildlife, public health, and has many other economic, environmental, and social impacts.”