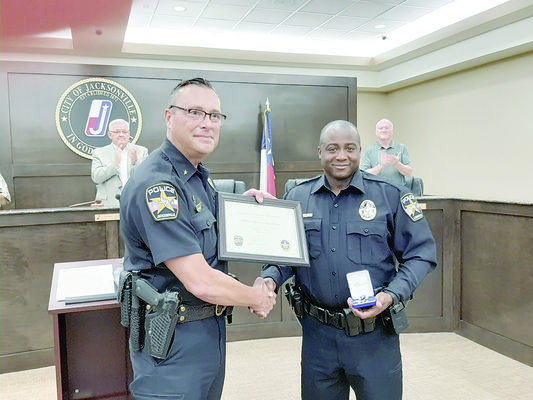 “As chief, it is my honor to bestow upon Officer Hamilton the State of Texas Medal for Heroism,” Jacksonville Police Chief Andrew Hawkes stated to the city council and attendees at the Aug. 13 meeting.

Officer Quincy Hamilton has been with the Jacksonville Police Department for approximately four-and-a-half years. Prior to joining JPD, he served as a probation and parole officer.

Hamilton was honored for his heroic actions in the early morning hours of Sunday, July 22. With the other officers on duty already out on calls, Hamilton responded alone to a disturbance call on Alabama Street.

As Hamilton described the incident, the fighting had stopped and people had started leaving when he first arrived. He remained to make certain no one was in need of medical attention and found one man with “a pretty good gash on top of his head.”

While he was speaking with the injured man, a fight began right in front of him with others joining in.

Hamilton utilized both his Taser and his pepper spray.

That would not be the first physical confrontation Hamilton would be involved in during incident.

While trying to handcuff a suspect and keep a second man off of himself, a third would sucker punch Hamilton in the face.

His injuries from the included a sore wrist as well as abrasions on his elbows and knees.

A portion of the commendation letter written by Sgt. Steven Markasky read:

During this incident, it is apparent that Officer Hamilton showed no hesitation to serve his community in an attempt to stop several unruly, intoxicated individuals who showed absolute no regard to any laws or law enforcement personnel attempting to keep peace in the community. Officer Hamilton endured a six-minute confrontation alone against multiple suspects who wished harm against him. It is my opinion as Officer Hamilton’s supervisor that he be recognized for the stressful incident.

When asked how he felt about the recognition, Hamilton answered, “I’m proud, real proud.”

Hamilton’s eight-year-old son Kaison is also very proud of his dad and wants to become a police officer, too.