A legacy of love: a coach remembered 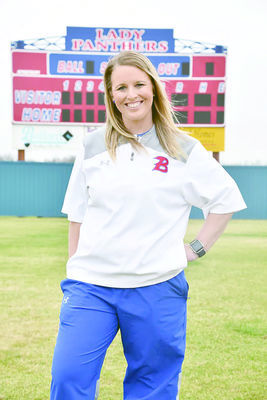 “She was like our mother, a friend, and most of all, a sister. Yes, we lost our beloved softball coach to cancer and, in the process, we gained a softball angel that will forever watch over us.”

Those are the words written by Jolee Dixon in a petition on change.org to rename the Bullard ISD softball field to Dobrinski Field.

Coach Megan Dobrinski, also known as Coach D, is the one for whom Dixon wishes to rename the field. Dobrinski was diagnosed with cancer in May of this year. She succumbed to the disease Wednesday, Aug. 14, leaving behind Jonathan, her husband of 11 years, and two children, Ella, age six, and Davis, age four.

When asked her reason for wanting to rename the softball field, Dixon stated, “To remind people of the legacy she left.”

“It makes me feel good,” Dixon said of the number of signatures. “We all knew she made a big impact on people but we didn’t think that it would be that big.”

Dixon has been a member of the Bullard softball team for the last three years and will play as a senior this year.
“It was super fun,” Dixon said about playing for Dobrinski. “We always had fun, even when we were getting yelled at. We [the team] were super close and we still are super close.”

Dixon, other team members and many people from the community were in attendance at an informal ceremony at the softball field Monday, Aug. 19. The gathering was organized by Terri Grossman whose two daughters, Aspyn and Berlyn, played softball bor Bullard with Dobrinski as their coach.

“I did it for all the softball girls,” Grossman stated.

The girls had wanted to do something for their coach in a place she loved so much.

“I thought we could have a moment of silence and release the balloons and just think about her,” Grossman said.

White balloons were given to those present and Grossman thanked those who had come, followed by remarks given by Chip Pittman, Bullard softball announcer.

“Wednesday is the start of the 2019-2020 school year for the Bullard family,” Pittman told the crowd. “There is one thing I know about Megan Dobrinski, it was that she didn’t spend a lot of time dwelling on losses… She went to work getting ready and preparing for the next season. The next season is here. So Wednesday, when we step foot back into our jobs, back into school, Megan expects you to go to work, so that’s what we’re going to do.”

Pittman led in prayer and the balloons were released.

An online account has been created to start a college fund for Dobrinski’s children. To donate, visit www.gofundme.com and search Megan Dobrinski.