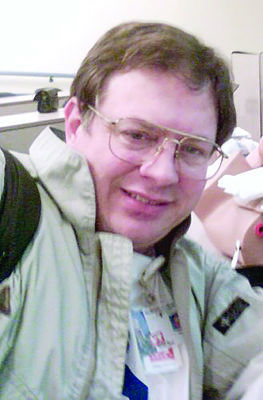 It was with heavy hearts that the staff of the Cherokeean Herald said goodbye to its longtime football correspondent, Robin D. Best. Best, 58, of Jacksonville, passed away on Friday, Aug. 9.

Best had covered Alto football games for the Cherokeean Herald for nearly 20 years. He had also worked for the Jacksonville Progress.

“Robin was proud to have been a writer for (the Cherokeean) and communicated many times how much he enjoyed his journalism experiences there,” Best’s brother, Mark Best said. “He especially enjoyed covering local football games and writing articles on local government happenings. His witty and often cheeky reports were humorous yet insightful. He had a deep desire to communicate factually and effectively while always keeping the reader in mind.”

Cherokeean Editor Cristin Parker said she worked with Best at the Jacksonville Progress as well.

“Robin was one of the funniest people I’ve ever met,” Parker said. “I worked with him when I first started my journalism career in 2000. It was really nice to reconnect with him as a member of the Cherokeean’s staff, too. He was a mentor and a friend. I know he will be missed, immensely.

Best attended Stephen F. Austin University in Nacogdoches, where he received a Bachelor’s degree in music. He also earned a Master’s degree in clinical psychology from East Texas State University in Commerce. He completed his second Master’s Degree in nursing from the University of Texas in Tyler. He was employed by Pediatric Home Health of Tyler as a pediatric nurse.
Best also continued to answer his calling in music by serving as music director for St. Johns United Methodist Church in Jacksonville and First United Methodist Church of New Summerfield.