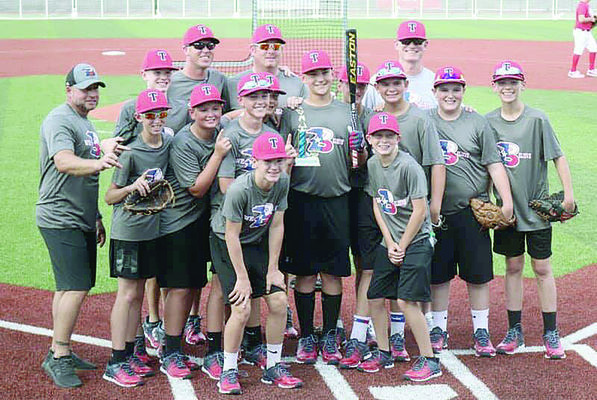 Courtesy Photo
Bullard 12U state championship team member Lex Rich (center, holding trophy), shown with his teammates and coach, won the homerun derby which took place just prior to the Dixie World Series. Dustin Wynne served as pitcher for Rich who shows off his award as the team celebrates his win.

After seizing the state title, the Bullard 12U All-Stars traveled to Ruston, La, to participate in the Dixie World Series as the Texas champions.

In their bid for the world series title, the team defeated their first two opponents, Arkansas (10-0) and Mississippi (6-2), before falling to South Carolina (5-3). The Bullard boys faced Florida, winning in a 2-1 finish to advance to the semi-final round.

Playing as the visiting team, Bullard contended with Alabama in a do-or-die situation that would determine which team would go home and which would advance to the championship game.

The first inning remained scoreless for both teams. Layne Alexander hit a single as the first batter in the second inning. Drew Bowman, third at bat for the inning, hit a line drive to the left field wall and advanced to second while Alexander made it home for the first score of the night. Bowman was only credited with a single, with his advancement to second and Alexander’s score were officially the result of an error. No more runners crossed home and two were left stranded on base.

The Alabama team answered with a single score to tie the game when a dropped fly ball allowed the runner on third to advance.

Bullard and Alabama each scored a second run during the third inning, keeping the game tied. With three up and three down in the top of the fourth, Bullard was unable to score in the inning. Alabama, however, picked up a single run, taking the 3-2 lead.

In the fifth inning, a single run to tie the game at three-all was scored by Ben Coke. He advanced to first on a walk and stole both second and third bases during Jachin Salas’ at bat. Nolan Hable then knocked a line drive to right field, allowing Coke to score.

Alabama brought home two runners in the bottom of the second, retaking the lead, 5-3.

Bullard answered with two runs of their own in the top of the sixth, tying the game at five runs apiece. Dylan Fowler reached first due to the second baseman’s error. With a 3-1 count at the plate, Trey Martin hit one down the first base line for a double and the RBI as Fowler was able to score. With two outs and Martin still on second, Bowman hit a grounder past third for a single, but allowing Martin the second run of the inning.

Going into the bottom of the sixth, Bullard had tied the game at five runs each but would have to prevent Alabama from scoring to remain in the game. The first batter of the opposing team hit a slow bouncing ball to short and was put out at first base. The second batter hit a line drive to center and was held to a single. Although the next batter was struck out, the runner on first stole both second and third during the at-bat, placing him in scoring position. With two outs and a runner on third, the fourth Alabama batter reached a 3-2 count at the plate.

He then hit a grounder to short, but the ball was overthrown to first, allowing the batter to reach first. It also allowed the man on third to score the winning run, giving Alabama the 6-5 victory.