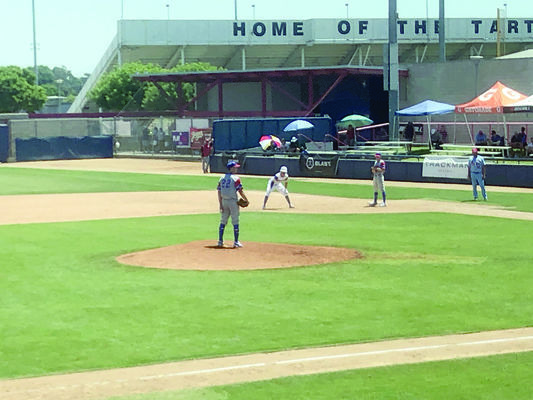 Photos by April Smith Bullard Panther Hagen Smith takes the mound as a member of the Texas Ranger Scout Team. 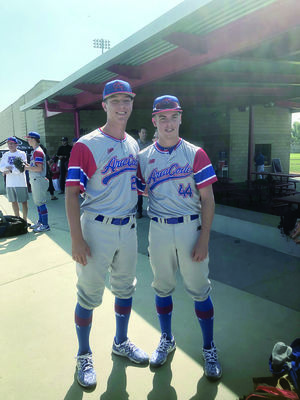 Smith (left) and J.D. Thompson of Rusk, both left-handed pitchers, participated in the 2019 Area Code Underclass Games after earning spots on the Texas Rangers’ Underclass team.
Previous Next

Hagen Smith, of Bullard, was named as a member of the Texas Rangers Scout Team and played at the Area Code Underclass Games in Compton, Calif., this past weekend. He was one of only 150 class of 2021 and 2022 baseball players chosen to participate.

“It felt pretty good,” Smith commented on his being notified he had made the team. “I wasn’t really expecting to make it because there was a bunch of people that were really good there.”

Smith, class of 2021 Bullard High School student, is a southpaw for the Bullard Panthers with an 8-3 record and 150 strikeouts over the two years he has pitched for the team.

“I’m extremely proud of Hagen and he hard work he has put in and I’m glad it’s paying off,” stated Brock Lamire, BHS head baseball coach. “This is one of the hardest rosters to make and it’s well deserving.”

Before heading to California to play the Underclass Games, Smith said he expected “really good competition and playing, and good coaching” at the event.

Scouts from all 30 major-league teams and the Major League Scouting Bureau were expected to attend the Underclass Games to evaluate the players.

Top National Collegiate Athletic Association (NCAA) coaches were to be in attendance as well.

The young man who began playing T-ball at the age of four and has his hopes set on a career in baseball may very well be on his way following this opportunity.

When asked what he would do if he received an offer from a major league team to play straight out of high school, Smith said, “I definitely would consider it.”

His parents Jeff and April Smith stated if such an offer were to come, supporting a decision to take the offer would “not be out of the question.”