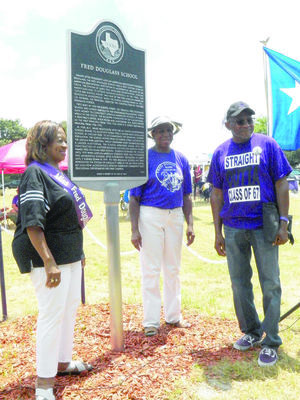 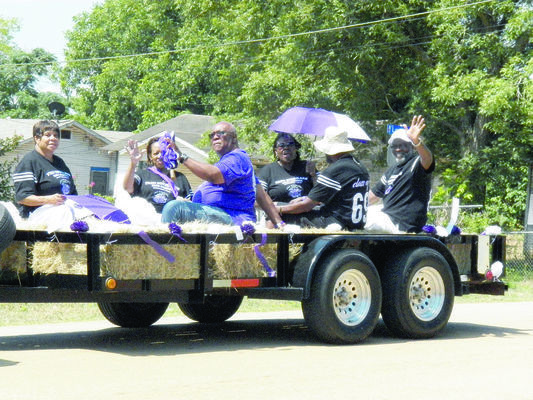 Alumni from the Fred Douglass High School class of 1969 waved at parade attendees during the festivities surrounding the 17th Fred Douglass alumni biennial reunion.
Previous Next

Preceding the ceremonial unveiling was the Dragon Parade, held in conjunction with the reunion. The parade featured current Jacksonville city council member Hubert Robinson; Miss Fred Douglass of 1964 and 1969, Sue Barner and Oscar Faye Branch Williams respectively; a float with several alumni and an array of corvettes driven by members of the Shriners of Aqaba Temple in Tyler.

Among those present for the dedication of the historical marker was Margene Williams of the class of 1952, who stated she was among the earliest class represented at the event. Miss Fred Douglass 1964 Sue Barner arrived from California to attend the reunion.

Tracy Wallace, former principal at Fred Douglass Elementary, welcomed those gathered and then outlined the program for the day.

Among those who offered remarks was Robinson, member of the class of 1965.

“I’m so honored to have the opportunity to be here to see this,” Robinson stated. “It’s happened because of your dedication, your commitment, your love for the city and your love for Fred Douglass.”

Robinson also read a message from the city manager and other council members welcoming the FDAA to the city and wishing the alumni an enjoyable weekend during the reunion.

Alumni members recalled life at the high school through the various decades of its existence before the official unveiling of the marker.

The historical marker recognizing the Fred Douglass School joins the memorial to Fred Douglass High School principals M.B. Davis, 1923-1956; and H.V. Jones, 1956-1970; as well as the flagpole erected during the 16th biennial reunion.