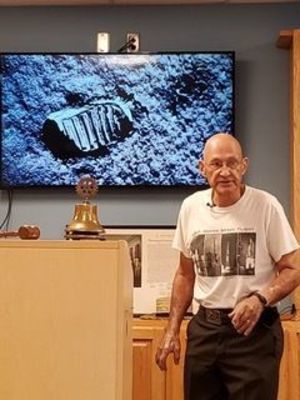 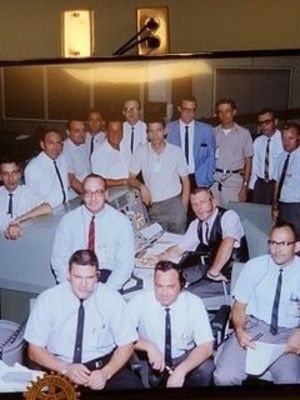 Larry Keyser, seated far right, is pictured with the NASA mission control team during an Apollo mission in the 1960’s. Keyser, who now resides in Rusk, was a guest speaker during a recent Rusk Rotary meeting. 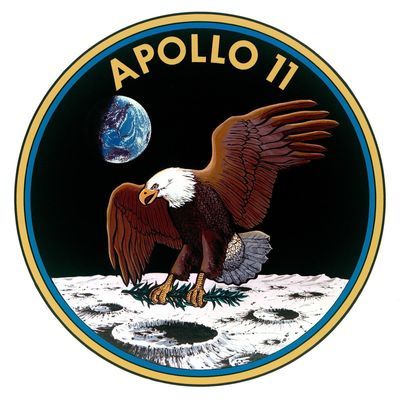 It was just a small step for one man, and a giant leap for mankind, but it took lots of steps by lots of others to get the Apollo mission to the moon and back again.

Upon an invite from Rotary member Ben Mims, former NASA assistant flight director and U.S. Army veteran Larry Keyser visited with the Rusk Rotary Club last week to reminisce on his 51 years working at NASA and the work he and the rest of his team did to put a man on the moon in 1969 – just in time for the 50th anniversary of the lunar landing.

Keyser graduated from University of Wyoming in 1963 where he studied statistics. He immediately joined the NASA team after graduating.

“I was very lucky to have gotten to sign up with NASA when I did,” Keyser said. “The very first NASA program, Mercury, ended in ’63. I got to sit in on the last splash down, so I can honestly say I worked for all of NASA’s programs.

“How many of y’all remember watching the lunar landing on TV,” Keyser asked the attending Rotary members – three of whom raised their hands.

Keyser explained, “Initially the moon landing was supposed to set down in a large crater (on the surface of the Moon).”

It was decided the shuttle needed to land in a more level area and didn’t set down in the original spot, Keyser said, which created some problems, mostly concerning fuel supplies.

Guest attendee Nancy Guinn shared, “We watched it but I don’t know that we (the viewers) knew it was so close to running out of fuel at the time.”

According to NASA, the primary objective of the Apollo 11 mission was to achieve the goal set by U.S. President John F. Kennedy on May 25, 1961 -- perform a crewed lunar landing and return to Earth.

“We were using a computer that had 32 kilobytes of memory,” Keyser said. “Compared to that, what we have today on our Iphones is incredibly so much more complicated.”

When asked, Keyser admitted, “I personally have never used a slide-rule – never even learned how, honestly.”

“Neil didn’t have a still camera, so anytime you see a still picture of someone on the moon, it’s not Neil,” Keyser revealed.

Keyser said it was a bit of a fluke that he was on the floor during the actual moon landing.

“They were supposed to go into a sleep period before the moon walk,” he remembers. “My shift was supposed to be during that sleep period. But Neil said, once they’d got there, that he wasn’t going to sleep – he was ready right then. So my team got to do the moon walk.”

That historic journey ended July 24, when Apollo 11 splashed down in the Pacific Ocean 13 miles from the recovery ship USS Hornet, after a flight that took 195 hours, 18 minutes, and 35 seconds.

Keyser showed numerous still photos of the control room at NASA and the ground crew that was instrumental in making the lunar landing possible.

NASA’s museum recently recreated the control room for a historic exhibit and invited all members of the lunar landing team back for a photo op.

“They recreated our control room all the way down to the files on the desks, from these photos,” Keyser admitted, then joked, “Now all I need is a skinny tie, like the ones we wore at the time, for our photo op. Anybody know where I can get a skinny tie?

“I’ve been very blessed,” Keyser said of his work at NASA. “I was very lucky to have been a part of making history.”

When asked what he thinks of the internet allegations that the lunar landing was faked, Keyser just shrugged, smiled and said, “It’s a free country, they can think what they want.”