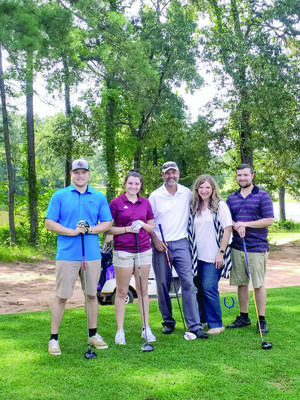 The family team fired a 13 under par 59 to take the victory by a single shot. Jacob rolled in a 30 foot birdie putt on the final hole, which ended up being the distance.

This is the first time I’ve ever got to play n a tournament with all three of my kids. Jacob and Lily have always played, but Josh has just recently taken up the game. We had a lot of fun.

A pair of teams tied for second place at 12 under 60 and needed a sudden death playoff to determine a winner. Only one hole was needed, as the Tyler team of Cory Lemons, Christian Ladd, Jonathon Ladd and Jeremy Brown birdied hole #1 to take the victory.

Finishing in third place, by virtue of the playoff, were the squad of Roger Redden, Jack Woody, Shelby Piece and Charles Ray Peters.

I won closest to the hole on hole #6 with my shot ending up just three feet from the hole.

“I would like to thank all the teams that played and all the sponsors who made the event a success,” said tournament organizer Brandon Downs. “I also want to thank Birmingham Golf Club for all their help hosting the event.”