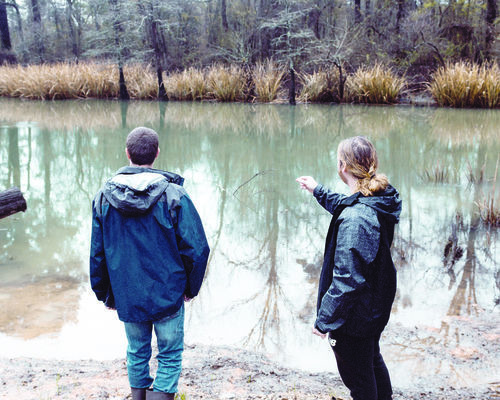 Christian Roper and Brackston McKnight lay eyes on Hendricks Lake, the alleged locale of sunken pirate treasure. The duo are currently working to make a documentary about the local legend of sunken silver ingots in the lake near Tatum. 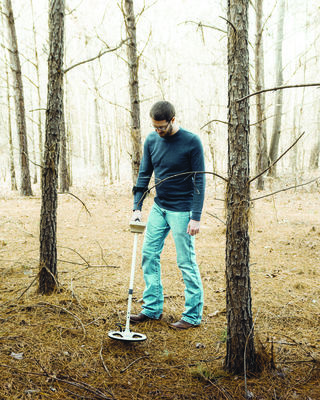 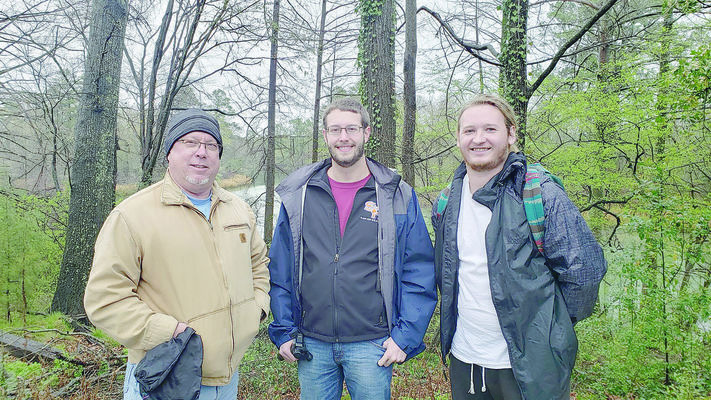 If pirate plunder and sunken silver hidden in a lake seem like the elements of folklore, they are. There is a legend surrounding a supposed lost treasure in East Texas, one that filmmaker Christian B. Roper and his team have been researching for a documentary production, Sunken Silver.

The tale basically states Galveston-based pirate Jean Laffite, in the year 1816, plundered a Spanish ship named the Santa Rosa. He gave the loot to smugglers who were attempting to transport six wagonloads of silver ingots to St. Louis where the treasure would presumably be minted into coins. While en route through East Texas, the smugglers received word the Spanish army was closing in and, in an effort to hide the treasure, dumped the loot in a local lake. Many believe the body of water concealing the silver to be Hendricks Lake near Tatum, although other places have also been examined.

Roper has been pursuing the legend and examining where and how the various parts of the story originated.

“When I found out there’s essentially a documentary, a great one right here in East Texas waiting to be put out there, I was just excited to try to do everything I could to make that happen,” he commented.

Although they attended different universities, Roper reconnected with high school friends Brackston McKnight and Ryan Travis and the three now work together on the project.

“It was one of the first times I met with Brackston after we graduated university last summer,” Roper recalled. “I’ve actually been at this project about 14 months now. Brackston has been on board about 12 of those months. Essentially, somehow treasure came up in conversation and I had asked him if he’d ever heard about the story of pirate treasure being lost in East Texas and we started slowly looking into it. When he got on board is when things started getting fairly serious.”

Roper himself had first heard the legend when he was a young boy and has returned to it intermittently throughout his life.

“My father did do a bit of treasure hunting and more notably he was involved in a few treasure hunting circles of scuba divers. When I was seven years old, we were at Athens Scuba Park owned by Calvin Wilcher and he was the one who told me the story,” Roper explained.“We were sitting in this dive store and Calvin just says, “Hey, have you heard the story of pirate treasure in East Texas?” At seven years old I’m just going to find that extremely interesting. I looked into it a little bit in high school and at UT, just on and off. I always thought it was interesting that people had reason to believe there was pirate treasure 200 miles from the coast.”

The open-endedness and lack of conclusion is what attracts Roper to the story today.
“When we were looking through the story and seeing some of the characters that got interested in it, seeing some of the nation’s most prominent treasure hunters getting interested in the story, the story being picked up by some of the largest magazines and news outlets across the country in the 50s and 60s, seeing involvement from one of the world’s most famous psychics…it’s an incredible story,” Roper noted.

The film will explore the history of various parts of the tale, how they came to be woven in to a single fable and will reveal what was discovered during the months of research put into the project, including a new theory and information indicating the account of lost silver in an East Texas lake is actually a combination of stories.

“We met with Gary in January and we had no clue about his book coming out, we just knew that he was kind of the expert on this trace, this route that had been taken in the story by this group of smugglers carrying all the silver,” Roper said. “We had not even known that he had heard of the treasure. We met with Gary and it was very strange because he was working on this book at the same time we were working on this film and it had been decades since anyone had ever shown any interest in Hendricks Lake.”

Pinkerton came across the Hendricks Lake legend while doing research for his book, Trammal’s Trace: The First Road to Texas from the North. He had heard about the Trace from his dad as a portion of it runs through family land.

During his research for Trammal’s Trace, Pinkerton came upon the legend and it was something he “tucked away and parked for a little while.”

The various people that searched for the Hendricks Lake treasure hooked him.

“The legend’s a legend, but the people that believed it and the effort they went through to actually find it despite obvious questions about the details,” Pinkerton stated. “When you see Hendricks Lake it just looks like it should have treasure in it.”

His book, True Believers: Treasure Hunters at Hendricks Lake, focused on the variety of people and their attempts to discover the fabled hidden silver and was released this past April.

Pinkerton himself doesn’t personally believe there was any silver brought through East Texas during the time in which the legend takes place because the roads were little more than Indian trails. He also noted there were a handful of other treasure legends that were nearly the same but with a different location or body of water and no specific piece of evidence regarding the Hendricks Lake silver on which he can “hang his hat.”

When asked what he hopes Sunken Silver will accomplish, he answered “just to tell the story.”

While Pinkerton believes the lake area should be a park, the reality is Hendricks Lake is no longer accessible by the public as the land surrounding it belongs to private land owners or is being leased by mining companies.

“Connecting the legend to people’s minds now so it doesn’t die out, I think is important,” Pinkerton asserted. “In the last chapter of the book, I really talk about where do we go from here now.”

“There’s something inherent in us that wants to believe those legends,” Pinkerton stated. “That’s the one thing we all agree on about Sunken Silver, is that legend is a very powerful thing.”

Filming for Sunken Silver should be completed by late summer and the documentary released during the fall. Although it hasn’t yet been decided if the film will first be released at festivals and then to the public, Sunken Silver will eventually be available through online streaming.

For information on, or to order Trammel’s Trace, visit www.trammelstrace.com.

To view perks for contributors or to make a donation towards completion of the film, visit www.gofundme.com/sunkensilver.