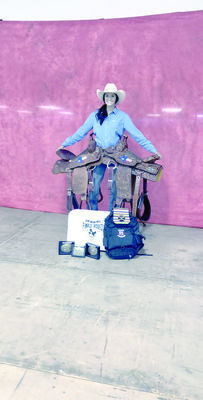 Davis shows off her prizes after earning the pole bending championship and All Around Cowgirl in the Texas High School Rodeo Association State Finals. 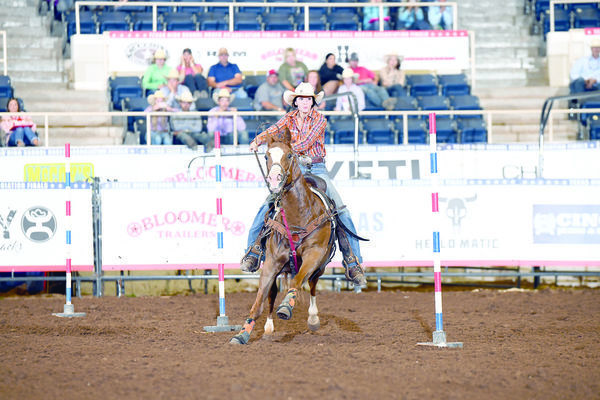 She had earned both the pole bending championship and All Around Cowgirl.

The contestant scoring best in two or more events is awarded All Around Cowgirl. Davis placed seventh in barrel racing and earned first in pole bending.

She also participated in breakaway roping.

The combined time that placed Davis first in pole bending was 59.908.

Jaden Thomas, who finished second, earned a 60.708, and Aspen Grant, who rounded out the top three, completed the event with a combined time of 60.748.

“We are beyond proud,” Reagan’s mother Katrina Davis stated. “We’re so excited for her.”

She broke it bad, too.

Another person’s pole horse fell back on her and her tibia and fibula were both out of her leg.”

Although the breaks in her right leg required three surgeries and doctors said she’d never ride again, according to Mom, Davis only missed two rodeos.

“I didn’t have a very good year last year,” Reagan Davis commented. “I broke my leg pretty bad, so coming back was probably one of my biggest accomplishments.”

Davis explained that it was more difficult and physically challenging to come back from her injuries than it was mentally.

“Mentally I was determined,” Davis said, “but physically it was pretty hard. It was rough at first, but I rodeoed while still on crutches. I was not giving up.”

Approximately six months after breaking her leg, a horse kicked Davis above the original break.

The only thing that saved Davis’ leg, according to her mother, is the rod that was put in following the first injury.

Although involved in various rodeo events, Davis claims to not have a particular favorite, stating she enjoys them all.

Davis got involved in rodeo because of her dad, who team ropes. She started competition about the age of 10 and her dad has been her coach.

While she has the backing of her entire family, Davis claims her mother is her biggest supporter.

Having just completed her senior year of high school, Davis plans to continue competing in rodeo while attending Weatherford College where she will study equine sports medicine.

Once she completes coursework at Weatherford, a two-year institution, she may transfer to Texas Tech, although a final decision has not yet been made.

Considering the adversity she faced during her junior year and her recovery from a broken leg, one can understand the excitement she says she feels about representing Texas at the National High School Finals Rodeo (NHSFR) in Rock Springs, Wyo., July 14-20.

As to her come back from such devastating injuries, Davis concluded, “I wouldn’t be here without the good Lord, that’s for sure.”

Other area students who competed at the Texas High School Rodeo Associaiton (THSRA) State Finals include: