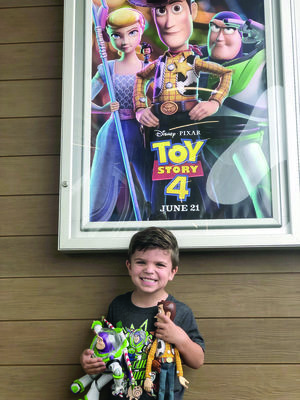 Men In Black: International (PG-13, 120 minutes) should have been titled Men And Women In Black since Emma Thompson is now head of the MIB agency, and Tessa Thompson becomes the partner of Chris Hemsworth.

This story begins in 2016 on the Eiffel Tower in Paris, where Liam Neeson and Chris Hemsworth repel an alien attack from The Hive.

The story resumes in 2019 when new recruit Tessa Thompson is detailed to the London office to investigate what may be some irregularities.

After working with Neeson and Hemsworth on a new problem, she suspects that there is a mole within the MIB who is informing galactic invaders about secret MIB plans.

The action moves to Marrakesh, Morocco, where they interact with some more exotic aliens of the universe.

Some of the most entertaining parts of the MIB are the whimsical designs of the possible life forms masquerading among us.

The script beguiles us with a detective story about finding out who is the traitor, while occupying our attention with the defense against insurmountable alien foes.

Tessa Thompson is a good addition to the cast as she fills in for the role that Will Smith has played previously.

This update of a familiar franchise earns a three warm potato entertainment rating.

The characters, old and new, and the themes are better than ever.

The film opens with a flashback nine years ago when some toys were taken away to new owners.

The main character, the cowboy named Woody -- with the voice of Tom Hanks -- now belongs to 5-year-old Bonnie after having served a boy named Andy for many years.

When Bonnie begins kindergarten, she makes a doll out of a plastic fork and some parts pieced together from thrown away scraps.

“Forky” becomes her favorite play thing, and when she loses track of him on a family road trip, the adventure begins.

The dialogue is surprisingly mature, without going over the heads of younger children.

The closing credits have some extra scenes worth staying to watch.

The Pixar studio at Disney picture making has produced a four potato masterpiece that will surely win awards this year.

Taxing Thoughts - How to protect your SSN from ...