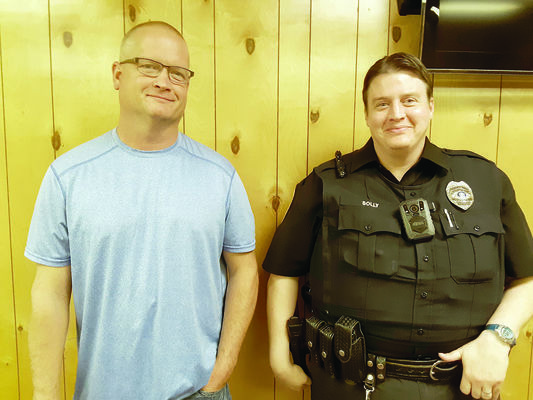 Michael Goff, left, and Shawn Solly were welcomed as the newest members of the APD during the recent Alto City Council meeting.

The Alto City Council approved an agreement Monday that will help continue clean-up efforts throughout the town.

“We assessed all areas and those listed are, I think everyone would agree, the ones with the most need,” Alto Code Enforcement Officer Lee Starling told Council members during the regular meeting held Monday, June 24. “Most everyone has debris -- some have just a handful, but these streets are the worst.”

TxDOT officials request property owners on the streets listed move all debris (household and vegetation) to the edge of their property for easy access.

Councilman EL Thacker said, during Monday’s meeting, he while he understood the reasoning behind the choice of streets to be serviced, he was also aware not everyone could “take the initiative and clean up their areas without the city’s help.”

“In a disaster like this, the city absolutely wants to help as many people as we can,” Thacker said. “We know there are people out there that can’t do it on their own – can’t afford it or because of physical issues.”

City officials encourage Alto residents who need clean up help or to find out where they can haul their debris to call City Hall, (936) 858-4711.

In a related matter, Council members unanimously approved a request to seek bids on clearing out one side of a creek that runs adjacent to Stadium Street. The request for bids was made by Councilman Steve Cox, who showed fellow Council members photos of the flooding inflicted on his home recently.

“It got pretty deep out there, as you can see,” Cox said as the rest of the Council looked at the photos on his smartphone. “Last year we cleaned out the other side of that creek and it really did help, but now we’ve got the same problem on the other side – it’s just grown up so much, the water’s got no place to go.

“Our guys have done a great job keeping the one side cleaned up, but now we got to do something about the other side.”

The first clean out project cost the city between $7,000 and $9,000, according to city officials.

Utility Director Kerry Black also recommended looking at cleaning out the creek because its flood waters also cause problems with the city’s wastewater system.

“Several of our sewer mains runs along with that creek and when it floods all that extra water infiltrates our system into the manholes because it has nowhere else to go.”

Both recently joined the APD and bring nearly 40 years’ of law enforcement experience between them.

“I’m just tickled to death to have them both on my team,” Chief Jackson said during Monday’s meeting.

The Council all welcomed the pair and said they were glad to have them.

Other agenda items Alto City Council approved on Monday include:

- reimbursing The River Church transportation fees of $300, after the church helped an Alto resident place a mobile home on property inside the city limits. The Council approved waiving those fees in a prior meeting for storm victims;

- financials and minutes of previous meetings; and