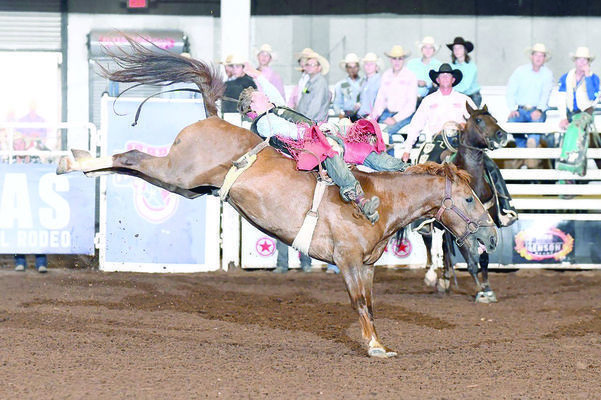 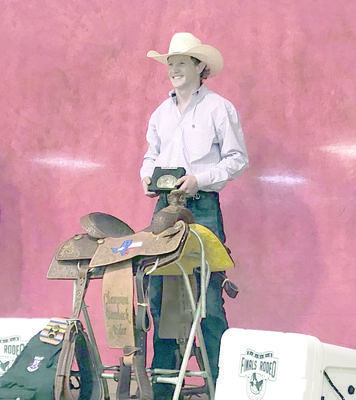 “Real exciting, all my hard work has paid off,” Dement said of realizing he had become champion. “It’s overwhelming.”

Dement says he enjoys the thrill of the ride and the adrenaline, but doesn’t think about the risks, just taking one ride at a time. Just before the gate opens he thinks about setting his feet and going at [the horse] every jump he can.

A broken hand and thumb resulting in a plate and six screws, kept Dement out for about a year, making his achievement that much more impressive.

“It was just a mental game getting over the break and not stressing about the hand … getting it out of your head to get on and not worry about the hand,” Dement commented.

The 17-year-old Dement now has the honor of representing Texas at the National High School Finals Rodeo (NHSFR) in Rock Springs, Wyo., July 14-20.

“It’s just an honor to go up there and represent Texas,” Dement stated. “It’s pretty thrilling.”

He gives credit to his coach Tyler Sullivan, “He’s taught me everything I know. He pushes me hard. He puts a lot of effort into me. He comes to everything that he can, because he works a full time job. He’s my role model.”

Dement also stated his mother is his backbone, screaming and hollering for him every time he rides, videoing the event.

“I’d like to thank my sister, Jimmie Lynn. She’s a big support in my rodeo career, too, and my whole family,” he added.

Dement said he has been involved in rodeo since he was about three years old because “it has been in my family for a long time.”

“They rode steers in junior high and he was the junior high state champion his eighth grade year,” Tracy Dement commented. “We went from there; our next step was horses.”

Although he began on steers, Dement’s mother says he always wanted to ride horses.

“I’m just so excited,” she said of his championship. “He practices really hard. He works hard at it. He has to keep his grades up. I’m just very, very proud of his accomplishments.”

Dement plans to attend college, possibly at Panola Junior College, to study agricultural business, but would like to make a living in the rodeo.

If not in rodeo, he said he could see himself possibly with his own string of bucking stock or owning a construction company.

Reagan Davis, of Alto, also participated in the Texas High School Rodeo Association State Finals and earned the 2019 THSRA State Pole Bending Championship. She will be featured in the Wednesday, June 26 edition of the Cherokeean Herald.