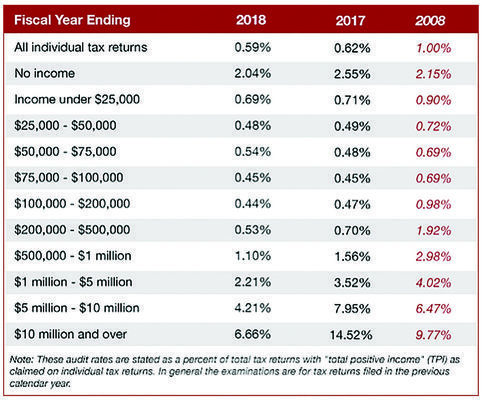 The IRS reported audit rates declined last year for the seventh year in a row and reached their lowest level since 2002. That’s good news for people who don’t like to be audited (which is everybody)!

But don’t get complacent. A closer look at the IRS data release reveals some audit pitfalls you should know about.

•Fewer audit examinations obscure the reality that you may still have to deal with issues caught by the IRS’s automated computer systems. While not as daunting as a full audit, you’ll need to keep your records handy to address any problems.

•Average rates are declining, but audit chances are still high on both ends of the income spectrum: no-income and high-income taxpayers.

•No-income taxpayers are targets for audits because the IRS is cracking down on fraud in refundable credits designed to help those with low income, such as the Earned Income Tax Credit (EITC).

•High-income taxpayers have long been a target for IRS audits, but saw a big decline in audit rates in 2018. Still, taxpayers with over $500,000 in income have more than double the chance of being audited than lower income taxpayers. Not only do these taxpayers tend to have more complicated tax returns, but the vast majority of federal income tax revenue comes from them.

Always retain your tax records and support documents for as long as you need them to substantiate claims on a return. The IRS normally has a window of three years from the filing date to audit a return, but this can be extended if the agency believes there’s any fraudulent activity.

If you receive an audit letter from the IRS, it’s best to reach out for assistance as soon as possible.