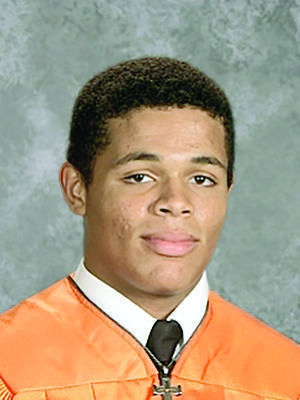 Courtesy Photo
Jakari Hadnot received special permission to pitch in the Class-A State semi-final game, which took place on the date he was to go through processing for his enlistment in the National Guard.

Jakari Hadnot, one of the starting pitchers for the Wells Pirates, almost missed participating with his team, the Wells Pirates, in the Class-A State semi-final game Wednesday, June 5. As it turns out, that was the scheduled departure date for Hadnot to be processed in Tyler and transported to Dallas where he would then be flown to Fort Benning, Ga., the next day.

Hadnot signed up for a six-year stint in the National Guard in April 2018, his junior year in high school. His mother, April Lee, says she “cried like a baby” when he signed with the National Guard due to the realization he was “becoming a man.”

“It was upsetting as a mother, but I support him in anything he wants to do,” Lee said.

Hadnot’s decision to join the National Guard was based primarily on the fact that the Guard would help pay for his college, where he plans to study criminal justice to become either a game warden or law enforcement officer.

“I’m a single mom and he didn’t want to put that burden on me,” Lee stated.

Hadnot completed basic training during the summer of 2018, causing him to miss the first week of his senior year.

A week before the Wells Pirates won their first Regional playoff, Moore states he saw a news report about a softball player from Connecticut.

That player’s team had traveled to Tyler to play in the national softball tournament and she’d had her ship date to basic training delayed in order to participate with her team.

“They were very receptive, very helpful,” Moore stated of Gooden and his staff. “I know there are bigger, pressing issues in our society, in our world, but the fact that they took time to help a young man from Wells, Texas, just meant the world to me and definitely to him.”

Moore claims that his assistance to Hadnot consisted of only a couple of phone calls, but Hadnot and his mother were both grateful for Moore’s part in getting the departure date changed to Tuesday, June 25.
“I couldn’t thank him enough,” Lee said. “It was very overwhelming that he went that far to help Jakari out so he’d be able to stay and play with his team -- with it being his senior year, it was a wonderful experience.”

“I just wanted to be able to finish out the season with the team; that’s all I wanted to do,” Hadnot declared.

Hadnot said that at the State playoff he just went out and played baseball, and “tried not to think of anything else.” He also commented, “I’m just glad that we could make history there at Wells.”

Although the Pirates failed to reach the final game for the State championship, the 2019 Wells Pirate baseball team was the first to reach a State playoff in school history.

When questioned how he was using his time before his new departure date, Hadnot commented, “I’m spending my time with family and friends as much as I can, just trying to make memories with them.”