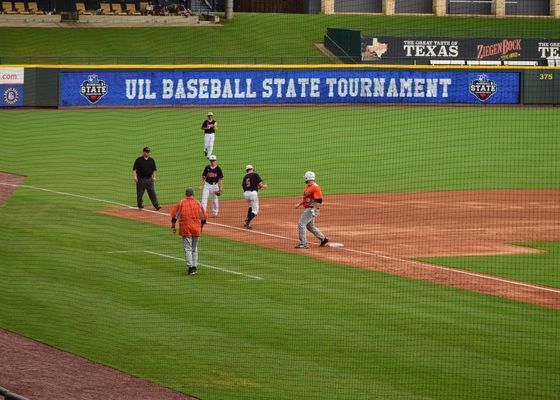 ROUND ROCK—The Wells Pirates and Coach Tarrant saw their season come to an end Wednesday morning at the hands of the New Home Leopards, a team making their second appearance at the state tournament in two years.

Jakari Hadnot went 5.0 innings in the starting role allowing only five hits and striking out seven on 110 pitches, the final pitch resulting in an RBI single accounting for the fifth of six runs allowed by the senior.

Garrett Allen had the Pirates’ sole RBI, a hit-by-pitch that plated short stop Kaleb Parnell who had led off the inning with a single, Wells’ first hit of the game.

Tanner Glover scored the first Pirates’ run in the second inning on an errant throw that allowed him to escape a run-down after a wild pitch immediately careened back into New Home’s Ryan Bundy’s mitt, leaving Glover hung up between home and third base.

The game ended on the ten-run rule with one out in the bottom of the sixth inning when New Home’s Gabe Cantu drove in the Leopard’s 11th and 12th runs of the game on the first pitch he saw from Logan Tucker who caught until being called on to relieve Parnell, one of three Pirates’ pitchers to see action in the sixth inning.

Wells ends their Region III Championship season with a final record of 16 wins and nine losses having won 11 of their last 13 games entering today’s contest.