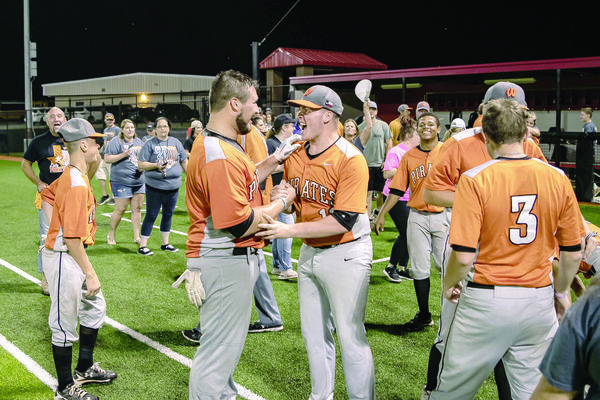 Photo by nathan johnson - natejohnsonphoto.com Wells seniors Jackson Scroggins and Dillon Manning (center) and the rest of the Wells Pirates baseball team, along with fans, celebrate their win over LaPoynor last week. The Pirates are now advancing to the State baseball playoffs in Roundrock. PPND - Pirate pride never dies! 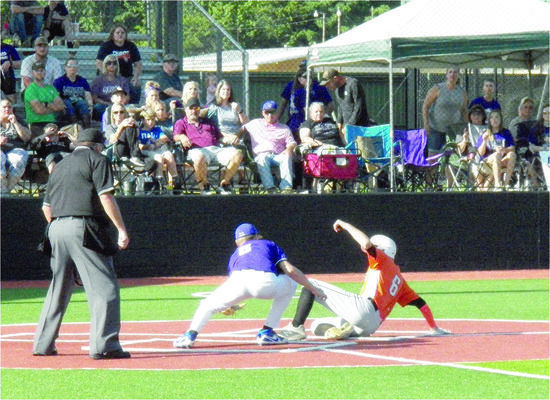 Photo by Michelle Dillon WHS Pirate No. 6 Logan Tucker slides across home plate to score one of the three runs in game two of the Regional playoffs against the LaPoynor Flyers.
Previous Next

After splitting wins in the first two games with LaPoynor, 12-2 and 3-13, the Wells Pirates slid past the Flyers by a single run, 6-5, to win the third game and the series, sending the Pirates to State.

In a win or go home situation, the Pirates (16-8) will face the New Home Leopards (19-2), from the Lubbock area, in the state semifinal.

The game will take place beginning at 9 a.m. at Dell Diamond in Round Rock Wednesday, June 5.

The Pirates are designated as the visiting team.

The winner of this game, should Wells claim victory over New Home, will be the Pirates’ opponent in the State Championship game slated for 9 a.m. Thursday, June 6.

Wells defeated LaPoynor in game three in a surprising but simple finish.

The game was tied at five runs each with two outs, basses loaded and Jakari Hadnot in the batter’s box.

Standing at the plate, Hadnot was hit by a pitch. The walk-off gave Wells the game and series win, as well as the Class A Region 3 championship.

Hadnot, Logan Tucker and Kaleb Parnell teamed up on the mound to defeat LaPoynor. Hadnot posted five strikeouts in three innings of work.

The team managed only two hits in game two, off the bats of Logan Tucker and Jackson Scroggins, but slugged eight balls in game three.

The seven errors of game two were not repeated, as Wells played a clean game defensively in the final round of the series.

They, along with the rest of the team, will represent Wells in the first ever trip to state playoffs for the school.

Wells’ head coach Joe Tarrant said, “All year long I have said to the kids, ‘Why not us?’

“I am super excited for these kids. They are making history for Wells ISD. Win or lose, these kids will have a special place in our hearts.”