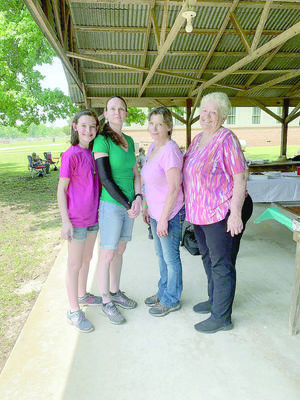 Photo by Chris Davis
Four generations of Hazel Jones’ family was present at the Lynches Chapel Cemetery Homecoming. Pictured are Hazel Jones, her daughter Sheila, her granddaughter Lisa and her great granddaughter Kadance.

Folks along El Camino Real are enjoying the first week of June in the usual way.

Wringing wet with sweat from the humidity, swatting at mosquitoes and flies on the porch, and wondering when fall is going to be here. We just can’t be satisfied.
I’ve done my best to try and remember what I could from this past week, so I could get your six bits worth of news, but it seems like the remembering is getting harder to do than it use to be.
The big news around here this week happened a little south of El Camino Real in Wells.

The Wells Pirates are going to be playing in the Texas UIL 1A State Championship in baseball on Wednesday, June 5 in Round Rock at the Dell Diamond. When they win that game then they will play for the Championship on June 6.

The only thing more exciting than playing in the State Championship is winning it.

Everybody in Cherokee County needs to be a Wells Pirate fan this week! Go Pirates!
Nearly every morning when I stop by the Donut Shop, Danny Huggins is sitting at the picnic table waiting on a ride down to Lindsey’s.

I visit with him and then I head north and he heads south.

I talked to Danny’s mother Patsy on Sunday night and she told me that Danny had to be rushed to the hospital in Tyler on Thursday night with what sounded like a bleeding ulcer.

Danny is 61 years old. Please keep Danny in your prayers for a quick recovery. We get used to people being where they normally are and when they aren’t, it throws everything out of kilter.

Things have been pretty quiet down at Mollie’s Diner this past week.

My dad, Larry Davis, had knee replacement surgery on Wednesday, so they didn’t have him to contend with.

His surgery went fine and he is working hard at therapy, so he can get back to his important job of fishing.

My Uncle Charles Dean Davis has caught nearly every fish in Sam Rayburn since my dad has been down.

A big thanks for all the prayers! I’m sure the folks at the hospital appreciated them.

The Old Palestine Baptist Church will celebrate their 175th year of continuous service to the Lord at their homecoming festivities on Sunday, June 9, starting at 10:30 a.m.

The church is located off Highway 21 East at 290 CR 2610. That is behind the Old Palestine Cemetery, if you were wondering.

The church was founded in 1844, a year before Texas joined the United States. I would say that their church has a history worth bragging about.

The speaker for this year’s homecoming celebration is Brother Bobby King.

Peter Paddock will be heading up the music for the service.

There will be lots of special music, fellowship, and of course a covered dish lunch to top it all off.

A big congratulations to the members of the Old Palestine Baptist Church on their 175 years of faithful service to their faith.

I went out to the Lynches Chapel Cemetery Homecoming on Saturday and it seemed like the crowd was a little light this year.

Omie Jones’ family was well represented with her kids, Carlton Jones, Hazel Jones and Norma Jones. None of them were light, but the crowd itself was.

Hazel had four generations of her family in attendance -- her daughter Sheila, granddaughter Lisa, and her great granddaughter Kadance. There was a big spread of food, and I don’t think anybody left hungry.

Freddy Wallace said that they were going to have some special activities for next years homecoming and hopefully the crowd will be back up.

The cemetery looked real nice. It would have been my mother’s 81st birthday on Saturday, so I’m glad I made it out there for her.
I was walking up in the pasture Sunday afternoon and felt a sting across the back of my leg and a memory from my childhood painfully returned.

I can’t remember the last time that I got into a bull nettle.

It was something that we grew up watching for, but I guess I have gotten careless as years have gone by.

It’s strange how such a harmless looking little fuzzy plant can cause so much pain.

I guess it was good thing that I got into it, because sometimes we need to have a little reminder to keep us on the lookout for things that sting and bite.

It’s also something else that I need to teach my little grandson about.

I hope I don’t have to get reminded about red bugs or seed ticks anytime soon.

The Jacksonville Tomato Festival is coming up this weekend and I’m keeping my fingers crossed that I’ll have some tomatoes ready to show.

With the grand reopening of the Tomato Bowl on Friday night it ought to help draw in a big crowd.

I’m in the tomato eating contest again this year.

I’ve been in it for over 15 years now and haven’t won yet, but I’m not giving up. I hope I can save enough room for some of Sadler’s fried green tomatoes.

I guess I better wind this up and get on with doing something else, like sleeping.
If you’ve got some news that needs telling all you have to do is give me a call. I’ll see ya next week!
And remember, Sometimes you will never know the value of a moment until it becomes a memory.

Taxing Thoughts - How to protect your SSN from ...