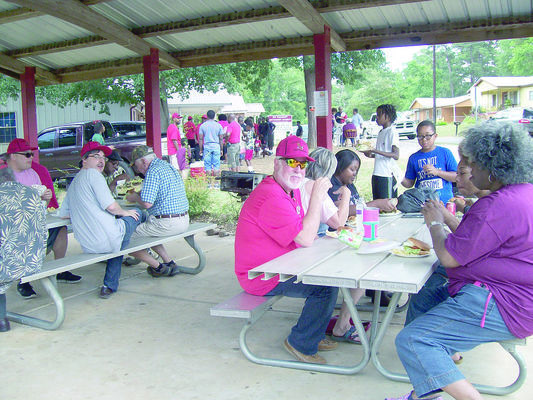 File photo
Community members from all over Cherokee County enjoy the picnic lunch during last year’s Juneteenth celebration at Conley Park in Rusk.

Everyone is invited to help celebrate the historic news during the annual Cherokee County Juneteenth parade and picnic, on Saturday, June 15 in Rusk.

The parade will kick off at 11 a.m. Saturday and follow the traditional parade route around the downtown square in Rusk. Parade line-up will start at 10:45 a.m. Saturday, along Sycamore Street behind Austin Bank-Rusk.

After the parade, bring an appetite to I.C. Conley Park and enjoy the free community picnic

Rusk’s annual celebration is sponsored by the Texas Informer, the Cherokee County Brotherhood and the city of Rusk.

“I want to say the city has been very supportive and helpful,” Sturns said. “We want to thank all our city officials for their help and support every year.”

According to the Texas State Historical Association’s (TSHA) Handbook of Texas Online, found at tshaonline.org, Juneteenth, June 19, is celebrated across the state each year to honor the date the state’s approximately 250,000 slaves received the news they were free, after the end of the American Civil War.

“(The holiday) is a good time to help education people about the significance of Juneteenth,” Session said. “There’s a lot of people who don’t know why we celebrate this day, including a lot of younger African Americans. It’s also a great opportunity to build bridges across our community and bring people of all races together.”

TSHA’s website reports on June 19, 1865, Union Gen. Gordon Granger visited Galveston to issue General Order Number 3, which read, “The people of Texas are informed that, in accordance with a proclamation from the Executive of the United States, all slaves are free.

“This involves an absolute equality of personal rights and rights of property between former masters and slaves, and the connection heretofore existing between them becomes that between employer and hired labor.

“The freed are advised to remain at their present homes, and work for wages.

The holiday is also observed in 45 other states and Washington, D.C.