Food for thought: RISD serving up new and improved menu

by By Cristin Parker cristin@thecherokeean.com 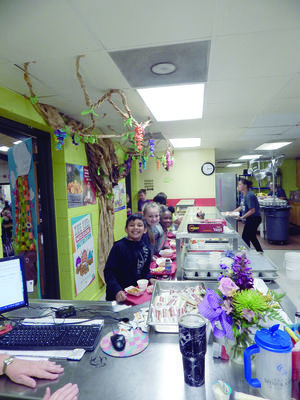 Photo by Josie Fox Rusk Elementary School students are all smiles on barbecue sandwich day in the cafeteria. 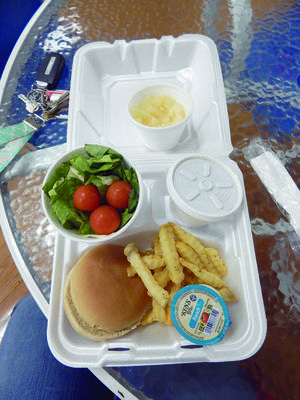 Photo by Josie Fox The barbecue sandwich meal includes a fresh side salad, seasoned fries and a generous helping of fresh fruit for dessert.
Previous Next

The Rusk Independent School District’s food service department is tantalizing the taste buds of some of what could be called the pickiest eaters of all – elementary school age children.

Last Thursday was barbecue sandwich day and students at the Rusk Elementary School campus were treated to a sizable barbecue sandwich on a whole wheat bun, seasoned French fries, fresh green salad and a choice of fruit – pineapple, pears or peaches – for dessert.

“My favorite is the barbecue sandwich because it smells like bacon,” third grader Carter Davis said.

Third grader Jaylon Overstreet agreed, “The barbecue is the best – it’s my favorite!”

Classmate Eiryan Eide added, “I love barbecue sandwich day because it tastes so good. All the choices are pretty good.”

Randi Scott, mom to second grader Jaden Lenes, came to eat lunch with her son on barbecue day and brought a Happy Meal from McDonald’s.

“I forgot it was barbecue day,” she admitted with a laugh. “He told me he wanted the barbecue sandwich from the cafeteria – I’ve never seen him turn down McDonald’s before!”

Jaden said, as he munched his cafeteria lunch, while he loves barbecue day, he wouldn’t let the fast food go to waste either.

“It’s just so good,” he said. “You really get full. My favorite is the (cafeteria’s) cheeseburger and the chicken fingers, too!.”

Food Service Director John Hood took over the department in June 2018 and, with the help of the rest of the cafeteria staff, has been tweaking the menu to make sure every RISD student gets a nutritious and delicious breakfast and lunch every day.

“Everything we’ve been able to do was made possible by the foundation the former director, Sandy Collins, laid while she was here,” Hood said. “If not for her, 90 percent of what we’re able to do now just wouldn’t be possible. And we’re continuing to make strides and build on our successes in making sure no child in our district goes hungry, thanks to the department’s Assistant Director Doris Lindsey, Avis Leavins, Stacy Young and the rest of my phenomenal staff and the support of Superintendent Gray Burton and Principal Debbie Welch.”

Food Service Manager Kelly Ford added, “I’ve been here for 24 years and I’ve seen a lot of changes. I’m seeing a lot of good changes now and the kids really seem to enjoy it.”

“The students really seem to get excited about lunch now,” she said. “Their lunches aren’t just sitting on the trays anymore and they’re trying new things.”

Hood said one of the biggest things that aided him in deciding what menu changes to make was taking several students to a food vendor show last year.

“We took 15 students to a food show that features thousands of vendors and just turned them loose to taste test everything,” he said. “They were so full after about an hour and a half they didn’t even want to move. From that we added nine new items to the menu this year to encourage more of our kids to eat a balanced meal, not just chips and soda or something.”

Hood said he’s pleased, too, that a lot of the changes made to his cafeterias’ fare are tempting the teachers and other adult staff into eating at school more frequently.

Elementary School third grade reading teacher Tammy Brogdon said, as she selected a fresh salad to go with her barbecue sandwich, “It really is better this year – better tasting, better selection – just better all around.”

“We’re extremely proud of our chicken sandwiches,” Hood said. “They’re just like the sandwiches you get from a very popular chicken sandwich restaurant chain. In fact, I’ve been told if you add their sauce to our sandwich, you can’t tell them apart. And ours are baked and come on a whole wheat bun, so they’re even better for you!”

In fact, RISD’s food service department fries absolutely nothing on the menu. Each meal includes two whole grains, a meat entrée (RISD cafeterias offer two meats each day, for a choice) and at least one serving of fresh fruits and veggies – as mandated by state law.

“We’re always making sure we adhere to the state’s rules and regulations on portions, sodium levels, calorie count, variety and everything else,” Hood said. “It’s a lot of details to keep up with.”

Hood said as the school year comes to a close, his staff is already working on the district’s annual summer food program.

“Anyone ages 18 and under are welcome to come have lunch at the Rusk Primary School, absolutely free of charge,” Hood said. “Historically, we’ve not seen a real strong participation in this program, but we’re hoping as word gets out about the food, more people will take advantage of the summer meals.”

Lunches will be served from noon to 12:20 p.m., Monday-Thursday, June 3-20 at the Rusk Primary School campus,

The program is offered in partnership with the Texas Department of Agriculture’s Seamless Summer Nutrition Program.