TDCJ staff honors those who died in the line of duty

by By Cristin Parker cristin@thecherokeen.com 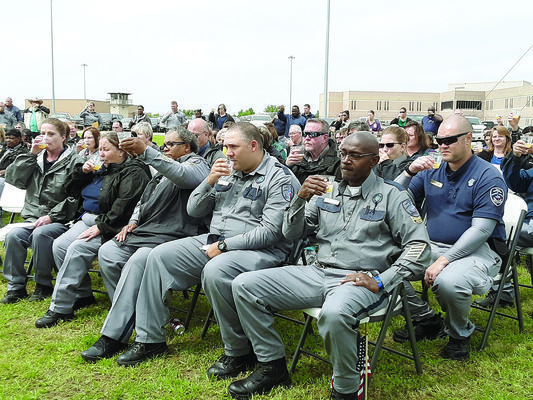 Photo by Cristin Parker
Texas Department of Criminal Justice Skyview/Hodge Complex employees raise a glass in honor of TDCJ employees who made the ultimate sacrifice.

Skyview/Hodge Complex correctional officers, administration and staff paid tribute to the 73 Texas Department of Criminal Justice employees who lost their lives in the line of duty since 1882.

“We also want to honor our fire departments, police departments, sheriff’s offices and all the others that work to protect our great state,” Master of Ceremonies Major Monika Howard said as she opened the memorial service, held Friday, May 10, under the big oak tree on the prison complex grounds.

“We take this opportunity to reflect and remember – to pay homage to those who have paid with their lives,” Assistant Warden Keith January told the crowd, which included officials with Cherokee County and the city of Rusk. “They are gone, but not forgotten.”

“The ‘Missing Officer’ table, set for one – the empty place represents correctional staff who have given their lives in the line of duty, defending society while maintaining incarcerated felons,” she said.

Every part of the set-up signified something Warden England explained. The table is round to show everlasting concern for missing loved ones; the cloth is white to symbolize the purity of their motives while answering the call of duty; the sword stands for honor; the single red rose in a vase reminds of the lives of those missing and the friends that keep the faith; the vase with the yellow ribbon, symbolizing the continued determination to remember and ‘take care of our own;’ the slice of lemon reminding of the bitter fate of those killed or crippled while protecting society; a pinch of salt for the tears endured by the families that seek answers; the Bible to represent the strength gained by faith to sustain those that continue; the inverted galls to symbolize their inability to share in the day’s toast and the empty chair, because they are missing.