by By Cristin Parker cristin@thecherokeean.com 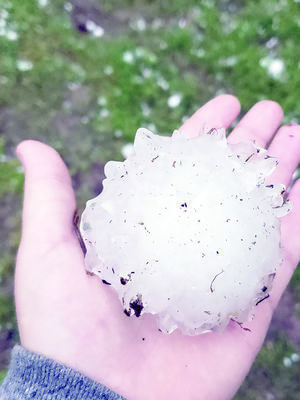 April showers brought lots of headaches to parts of Cherokee County over the weekend.

The National Oceanic and Atmospheric Administration (NOAA)’s National Weather Service (NWS) reported the storm system that moved across the area on Saturday, April 6, brought damaging winds of up to 93 miles an hour; dropped more than 5 inches of rain across the county; and pummeled several areas with softball- or grapefruit-sized hail -- causing chaos and potential insurance claims for some people.

“We lost a tree, But oh, are we blessed,” Gallatin resident Jenni Cudd stated in a post on her Facebook page. “It’s one that was damaged from before we moved in and it needed to be cut down. We’ve been praying that it wouldn’t fall on our house or cars. Today during the wind and rain, it fell away from the house! Now we’ll just cut it up and have firewood for next winter!”

Locally, the NWS reported receiving information about pea- and quarter-size to ping-pong- and golf ball-sized up to two inches in diameter falling in the areas of Maydelle, Jacksonville, Lake Jacksonville, Pierces Chapel and Neches.

“We’re glad there were no injuries and damage was minimal,” Cherokee County Emergency Management Coordinator Sergio Servin said. “We did have some issues with our Code Red system, where people weren’t getting their notifications early enough, but we are working to resolve that issue to make sure everyone is getting the information they need in a timely manner.”

NOAA reports also mention getting pictures of softball sized ice balls, shared with the organization via social media sites by residents of Alto and Grapeland.

“Everything that was outside was damaged,” dealership partner JD Pearman said. “And all six of our buildings’ roofs were damaged too. It’s going to a take a good little while to take care of things, but we’re moving forward with it.

“This is actually the first time we’ve ever been hit with something like this. But this is East Texas so it’s just something that’s going to find you sooner or later.”

Also on Monday, the National Weather Service’s Shreveport office on Monday extended the flood warning for the Neches River near Alto, through Sunday, April 14.

“At 9:15 a.m. Monday, the stage was 14.6 feet and expected to rise above flood stage (16 feet) by Tuesday morning and continue to rise to near 16.6 feet by Wednesday early afternoon,” the NWS report states.

While no tornadic activity was reported in Cherokee County, preliminary data point to EF-0 to EF-1 category tornadoes touching down in the areas of Beeville, Arlington Heights and Keenan – damaging an estimated 50 RVs; destroying 12 other RVs, at least one building and a trailer; and snapping numerous trees and light poles in those areas.

Power lines and trees were reported down across roadways in Nacogdoches, Lufkin and Crockett.

Reports of damage followed the storm’s path – from the Galveston and Orange areas all the way through east Texas and into Louisiana, Missouri, Tennessee and even into Illinois and Indiana.