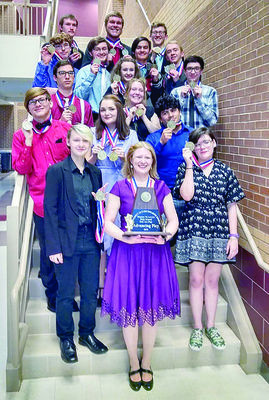 Oscar Wilde was once quoted as saying “I love acting. It is so much more real than life.”

And that is what the Talon Point Players of Rusk High School are setting out to do, bring life to the characters they are portraying during their One Act Play (OAP) competitions.

This year’s play selection is ‘Terra Nova’ written by playwright Ted Tally and published with permission by Dramatists Play Service.

‘Terra Nova’ is the story of British explorer Captain Robert Falcon Scott and his fated expedition to be the first to reach the South Pole.

Set in late 1911 and early 1912, the story is historically drawn from the journals and letters found on the frozen body of Captain Scott.

The play captures the chilling intensity and the awesome bravery of men who must accept the bitter knowledge that suffering and death will be the only reward for their heroism.

The company competed in district UIL competition on Friday, March 8 at Palestine High School against high school teams from Palestine, Mexia, Fairfield and Madisonville.
Along with advancing to bi-district competition, several company members walked away with awards and honors for their performances.

All Star Tech was awarded to Grace Veitch for makeup design and special effects.

All Star Cast was awarded to Rachel Coleman and Colton Morris and receiving Honorable Mention All Star Cast were John Wofford, Sean Chaffin and Kai Lucena.

On Wednesday, March 20, the team traveled to compete in bi-district competition against Carthage, Center, Huntington and Palestine, and once again came home with a victory.

Additional accolades and honors from bi-district included All Star Tech, which was awarded to Johnathan Torres for special lighting effects.

The win at bi-district secured a spot in area competition for the Talon Point Players, which will be held at noon, Saturday, April 6, at Centerville High School.

“We are so happy for our students’ success, they are so hardworking,” said Mary Coleman, mother of company member Rachel Coleman.

Additional performances of ‘Terra Nova’ will be held at Rusk High School following competitions, date and time has not yet been announced.