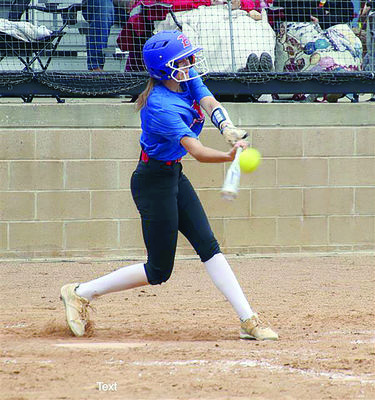 Courtesy photo
A Lady Panther team member makes contact with the ball during a recent district softball game. The Lady Panthers are undefeated in district play.

Asjia Canady pitched a shutout at John Tyler, striking out seven. The team totaled 25 runs in three innings of play.

The Maidens traveled to Nacogdoches where they defeated the Dragons in another shutout, 16-0.

Saylor Williams and Asjia Canady teamed up for the five-innings of work. Williams pitched four innings, fanning 10 batters. Asjia pitched a single inning, striking out one.

The Maidens were to travel to Lufkin Tuesday, April 2, and will visit Pine Tree in Longview Friday, April 5.

The Indians hosted the Dragons Tuesday, March 26, losing by a single run.

Jacksonville took a one-run lead in the first inning, 1-0. Nacogdoches tied the game in the third. Plating another run in the sixth inning, the Dragons took the lead and the win, 2-1.

The Indians traveled to Nacogdoches Friday, March 29, where they were shut out 5-0.

The Indians were to host Pine Tree Tuesday, April 1, and will travel to Pine Tree in Longview Friday, April 5.

Henderson crossed home once, but Bullard plated three more runs in the second inning to take a 6-4 lead.

The Lions answered late in the game, adding three runs in the sixth, but it was too little to overcome the Lady Panthers.

Traveling to Chapel Hill, the Lady Panthers shut out the Bulldogs, 19-0.

Ariel Matula pitched both games, striking out two in the Henderson battle and fanning 11 Bulldog batters.

The Lady Panthers were to visit Lufkin Tuesday, April 2, and will travel to Pine Tree in Longview Friday, April 5.

The Bullard Panthers remain undefeated in district with a 4-0 record, 14-3-2 overall.

Plating two runs in the first inning and taking the early lead would have been enough at Cumberland Academy as the Panthers shut out their opponent.

The team scored three more runs in the fifth and added two in the sixth to take the 7-0 victory. Mason Kelley pitched the seven-inning win, fanning 10 batters.

The Panthers shut out Cumberland by an even greater score when they played with the home field advantage, defeating the team 16-0.

The Panthers were to play Chapel Hill this week, hosting the Bulldogs Tuesday, April 2, and are traveling to Chapel Hill Friday, April 5.

With two wins last week, the Rusk Eagles are now 13-7 overall, with a 3-0 district record.

Mason Cirkel and Andrew Gates teamed up for the win over Fairfield, 12-2. Cirkel pitched four innings, fanning four. Gates pitched three innings, earning five strikeouts.
Fairfield took a 2-1 lead in the first inning, but it would be all the runs Fairfield would get in the seven-inning game. Rusk would score a run in third and fourth innings, seven runs on the sixth and finally, two more runs in the seventh inning for a total of 12 for the game.

The Lady Eagles won a closer game while on the road at Fairfield, 7-4. Rusk scored a single run in the first inning, taking the early lead. Both teams plated a run in the third inning.

The Lady Eagles answered with three runs in the fourth, and prevented Fairfield from crossing home in the same inning.

Rusk scored two runs in the sixth and allowed Fairfield to plate three. It was too little, however, to overtake Rusk.

The Lady Eagles had a bye Tuesday, April 2, but will return to district action Friday, April 5, when they host Mexia.

The Alto Yellowjackets hosted Apple Springs, defeating them in a near shutout, 18-1.

After allowing a single run for Apple Springs in the first inning, Alto plated 10 runs of their own. With another eight runs in the second inning, Alto insured their win.

The Yellowjackets were to host the Wells Pirates Tuesday, April 2, and will travel to Douglass Friday, April 5.

The two teams battled for diamond dominance with the Lady Jackets winning, 8-5.

The Lady Pirates took a first inning lead, 2-0, but the Lady Jackets plated three runs in the second. Alto scored another run in the fourth, and Wells answered with a run in the fifth.

Wells managed a single run in both the sixth and seventh innings, but it was too little to overtake the Lady Jackets.

Alto shut out Gary, 19-0, on Friday, March 29. The Lady Jackets traveled to Mt. Enterprise where they won, 17-4. Abbie Teutsch pitched both games, striking out four batters in each.

The Lady Jackets were to visit Douglass Tuesday, April 2, and will travel to Joaquin, Saturday, April 6.

After a first inning in which the team earned nine runs, the Tigers defeated West Rusk, 12-1.

The team hosted Arp, beating the rival Tigers, 8-3. Arp plated a run in the first inning to take the lead. Both teams crossed the home plate twice in the second inning. Troup scored another run in the fifth to tie the game.

Allowing Arp no runs in the top of the sixth and then plating five runs of their own, Troup took the victory.

The Tigers were to travel to Winona Tuesday, April 2, and will travel to Gladewater Friday, April 5.

The team hosted West Rusk, defeating the lady Raiders, 1-0. The game remained scoreless until the bottom of the seventh inning. With two outs and bases loaded, senior Tiffany Lacy swung at a low pitch that got by the West Rusk catcher. Carleigh Whitsell scored the single game winning run on the same play.

Lindsay Davis pitched all seven innings and struck out 15 batters for the night.

“I couldn’t be more proud to be their coach than I was tonight by the way that they balled throughout the entire game,” said head coach Sam Weeks.

Prior to hosting the Arp Tigers, Troup recognized the Troup Youth Association.

“We are so thankful for our youth program and the relationship that continues to grow between the high school program and TYA,” Weeks stated.

The Lady Tigers defeated their rival, 6-1. The Troup Lady Tigers had 11 hits and only one strikeout during the game. Davis pitched the game, fanning 17 of 21 batters.

The team was to travel to Winona Tuesday, April 2, and will travel to Gladewater Friday, April 5.

The Troup Lady Tigers recognized members of the Troup Youth Association Friday, March 28, prior to the game against Arp. The TYA participants stand side by side with varsity Lady Tigers on the field during the playing of the national anthem.