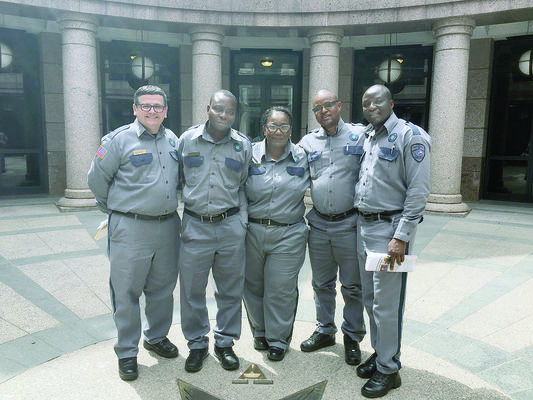 Local corrections employees from Palestine and the surrounding area visited with their State Representatives and State Senators in the State Capitol on Monday, March 25th to push for pay increases and pension protections.

In particular, the AFSCME corrections employees supported recent proposals in the House Budget (House Bill 1) and the supplemental budget that would restructure the current career ladder to reward employees for experience and increase pay, while also securing resources for their pensions. To emphasize the importance of a pay increase, the corrections employees told personal stories about how they work grueling hours in tough conditions -- and yet many of them are resorting to working a second job to pay their bills.

One of the corrections employees was Richard Salazar, a Food Service Manager 3 at the Sky Hodge Complex and President of AFSCME Palestine Local 3806. Salazar said he spent the day, “advocating for a better pay scale as well as pensions, so we can have more security in our facilities,” noting that the current pay structure makes it difficult to recruit workers.

Salazar added, “Every little bit helps. You have to have another job as a corrections officer or have another family member that’s supporting you because you don’t get paid a living wage.”

Tamber Williams, a Correctional Officer V, noted that safety and security is always a concern at the facility where she works. However, Williams added, “I’m a single parent and I work two jobs to try to supplement my income because we don’t make enough.”

Meanwhile, Isaac Abankwa, a Correctional Officer IV from Palestine, talked about the long work hours and time away from family that comes from staff shortages because of low pay: “You don’t have time to go to church.”

Additionally, the corrections employees from Palestine stressed that the financial strain from low wages leads to staff shortages because it’s difficult to recruit workers. James Arigbeb, a Correctional Officer IV from Palestine, explained that “a pay raise is a venue to bring in more people and then to retain them. Presently, people keep coming and going. We have trouble paying bills every month.”

“A pay raise would mean more staff. Right now, due to the low pay a lot of people are not staying at the facilities because they cannot sustain their families," said Anum Shelter, a Correctional Officer IV who also lives and works in Palestine.