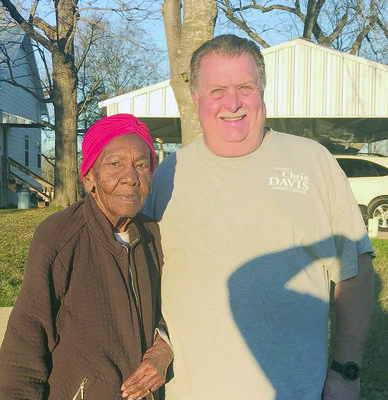 Folks along El Camino Real have been wandering around in the dark since the week before Christmas without their six bits worth of news, but the paper shut down for the holidays and I didn’t have time to make up two weeks worth of news and get it turned in before they left. Its not that I’m against making something up to flavor your six bits worth of news, but I can’t make it all up. I’m going to do my best to get you caught up and heading in the right direction this week.
The last days of December had our little town saying good bye to a lot of people that we cared about. I hate I wasn’t able to tell you about them sooner, but that is what happens when you miss a week or two.
Carroll Hollis was laid to rest in the Old Palestine Cemetery on Christmas Eve. Carroll died on December 22. He was 77 years old. He was a concrete finisher and I worked with him on many occasions in my younger days. Carroll spent his free time after retirement hunting and fishing. Please keep his son Tim and the rest of his family in your prayers as they mourn his loss.
We lost a sweet soul with the passing of Bettie Session just before Christmas. Bettie was 70 years old. She will be missed in our community. Please keep her family in your prayers during this difficult time.
Kenneth Brethouwer died on December 27 in Tyler at the age of 86 years old. Kenneth moved to Alto with his wife Bobbye Lou fifteen years ago. She was from Alto, but Kenneth jumped right in and became a big part of our town. He served on the Alto City Council and was an active member of the A Frank Smith United Methodist Church. After his wife passed away he had a stroke and has been living in Tyler for several years. Please keep Kenneth’s family in your prayers.
We lost May Dover suddenly on December 31. May was 70 years old. She has lived in Alto with her husband Larry Dover since 1969. They are good people and our hearts ache for Larry as he deals with his loss. Please keep Larry, their daughter Heidi, and the rest of the family in your prayers as they mourn her passing.
The Alto Buyers Group will be hosting their Annual Chili Cook-off Supper and Dessert Auction on Saturday, January 12, at the Alto Volunteer Fire Department. The chili judging will start at 5:30 p.m. and the supper will start soon after. Come out to enjoy some great chili for a low price that includes drinks, crackers, chips, and all the rest of the fixins for a good chili supper. The dessert auction will follow the supper. If you are planning on entering your chili in the contest you need to make enough to feed 20 people.

The dessert auction produced some outstanding entries last year, so I expect an even better selection for this year’s auction. We’ve got some great cooks in Alto and they really show out for this. All proceeds go to help our FFA, Junior FFA, and 4H kids with their projects at the County Show. This is fun you don’t want to miss, so be sure and mark your calendar.
The excitement of New Year’s Eve just doesn’t do much for me anymore. In fact this year the wife and I were wrapped up in our chairs trying to stay awake until the news came on at ten. I was talking to my friend Eloise Holcomb Williams about my New Year’s plans and she said that when they were little out in Lynches Chapel, she and Eva Rae Landrum would gather with the rest of the family by Hendrix Store for New Years. This would have been around 1936 to 1939 She said that nobody had any money for fireworks, but that Ollie Landrum and Weldon Hendrick would go out in the woods and put some dynamite in a stump and set it off. I for one would rather see somebody blow up a stump with dynamite than shoot off fireworks any day.
I always love to hear stories about how things were done in the old days, and before long I’ll be telling some young person about how I did things in the old days. Just to be on the safe side, I don’t think I’ll tell them everything I did.
Ms. Bessie Parker stopped by with her daughter and a niece on Saturday afternoon to get some greens. Ms. Bessie is 96 years old, so I got some chairs and she and I sat in the sun and talked while they picked. Ms. Bessie can remember things that happened 90 years ago like it was yesterday and I believe I could have sat in that warm sunshine and listened to her talk forever. When I mentioned something about my grandfather Lonnie Pyle, she told me the exact spot where he was baptized on White Oak Creek and that had to have happened better than sixty years ago. If we are going to remember the past it’s up to us to pay attention and listen when treasures like Ms. Bessie are talking.
I didn’t make any New Year resolutions this year. I didn’t figure there was any use in getting myself all worked up about something I probably wasn’t going to do anyway. I wonder how many of those big treadmills they sell in January as compared to the other months of the year. By April most of them are nothing more than expensive clothes racks in the corner of the bedroom. Besides, I don’t have all the fudge eaten from Christmas yet, so I need to get that tended to before I start on something new. If you did make a New Year’s Resolution I hope it works out for you.
Schools started back this week, so all the teachers and the little darlings are trying to get readjusted to each other. Being married to a teacher, I find myself having to get readjusted to my new found freedom. I hope the rest of the school year goes off with out a hitch and everything is wonderful. Because, I don’t want to have to listen to her until June if it doesn’t go good.
Well I guess I’ve caught you up the best I can in one week. If I missed something I’ll try not to forget it in the next issue. If you have something that needs telling then get a hold of me. I’m not hard to find. I’ll see ya next week!
And remember, To make a difference in someone’s life you don’t have to be wise, rich, or beautiful. You just have to be there when they need you.