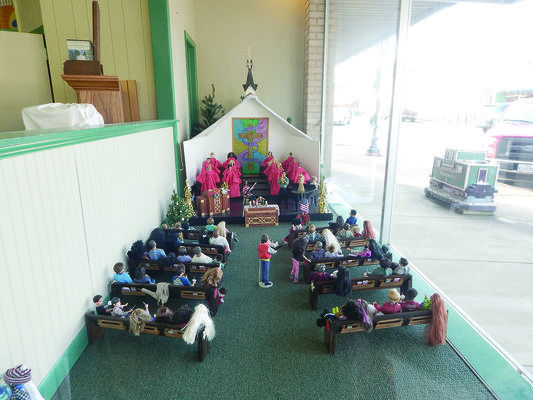 Photo by Josie Fox The 2018 theme for the annual Barbie window at Chapman’s Pharmacy in Rusk is Candlelight Cantata. 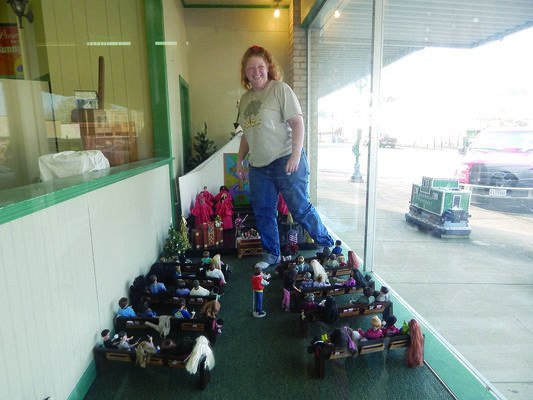 Photo by Josie Fox Cristin Parker puts the final touches on her Barbie Christmas display shortly after unveiling the window for the 2018 season. 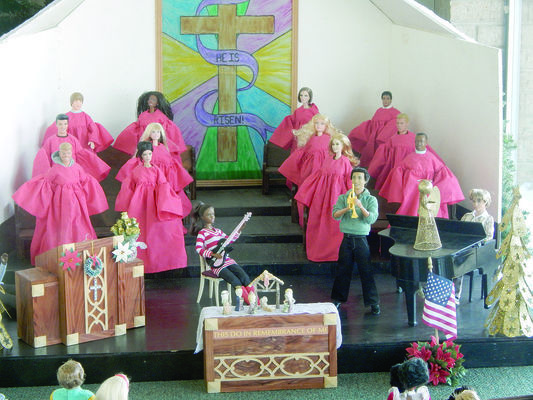 Photo by Josie Fox The choir members of the Candlelight Christmas Cantata display is comprised of dolls fashioned after actual singers and entertainers. 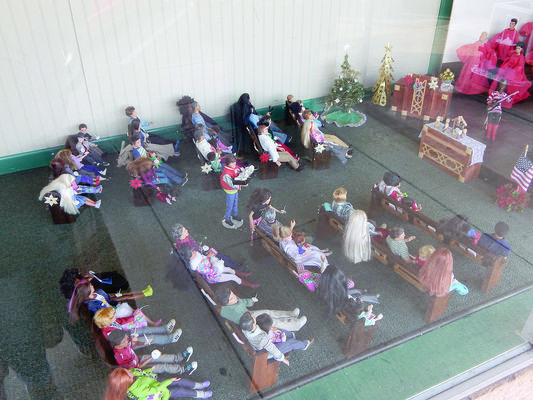 Every Christmas for the past 10 years, Chapman’s Pharmacy in Rusk has had one of their front windows showcase an elaborate holiday scenes. What makes the scene unique and magical is the fact they are comprised of Mattel’s Barbie doll and her friends, and each doll is from a vast collection owned by Rusk resident Cristin Parker.
“At a young age I began receiving a Barbie each year on my birthday and Christmas,” Parker said. “At some point you reach the age where you are no longer playing with the dolls, and you turn into a collector.“

Parker now boasts of a collection consisting of almost 3,000 dolls, in and out of boxes, along with cars, play sets, structures and accessories. Parker credits her grandmother, Kay Rogers, with purchasing her first Barbie Dream House and said that now, her family, friends and acquaintances often bring her items they feel she could use in the window or dolls they think she may like.

When asked what sparked the idea for the Barbie window, Parker said “I thought it would be a fun way to share my hobby. Currently Rusk does not have a doll club for collectors and enthusiasts; I wish they did.

“My family and several friends have been involved in the creation of the displays over the years, so in many ways, my hobby has allowed me to spend extra time with those that mean so much to me.”

Initially, the inaugural window was set to be displayed in the window of, at that time, Judge Forrest Phifer’s office.

“I had asked in June of 2009 and Judge Phifer had thought the Barbie window was a good idea, but when I followed up with him in September, I learned he had sold the building,” Parker said.
“Which was great,”she added, “but then I needed to find a new window.”

Parker approached Monte Ethington with Chapman’s Pharmacy, and the rest they say, is history.

“The window at Chapman’s is larger than the window I was originally going to set up the display in, so I had to rethink that first design,” Parker said.

Parker’s first window was a Winter Wonderland theme and had everything from sledding to skiing and ice-skating. The display also featured sleigh rides, snowball fights and, of course, Santa.

Each year is a new theme and design, although some props and backgrounds have been used more than once. If someone were taking tally, they would have seen a certain orange and black cat and an owl appear somewhere in each display. Other items that have made several appearances include the church used in this year’s Candlelight Cantata display. The Church was also used in her Christmas Wedding window and Best Christmas pageant displays.

The church, along with the pews and furniture inside the building, was constructed by Parker’s dad, Jerry Parker. Her brother, Jacob Parker, made the stained glass window and her mother, Diki Parker has been instrumental in assisting her with tracking down items to be used in each display.

“The design was super busy,” said Parker. “Everywhere you looked there was something going on or some hidden gem.”

One of the hidden gems referenced by Parker included Sasquatch lurking in the background. For authenticity, the display even included actual East Texas red clay for the base.

When asked what her most rewarding window was, Parker was quick to answer, saying hands down it was her Disney window.

“The Disney window was extremely fun to do,” said Parker. “Overall, I believe there were close to 70 Disney movies referenced in the design. My friend, Samantha McClure lent her amazing talents and painted my backdrop and Eddie and Anya Breen allowed me to borrow Anna and Elsa from their daughters so ‘Frozen’ would be represented.”

According to Parker, the window display she learned the most from, was her Christmas USO Tour. She completed a lot of research on the World War II USO tours to ensure her display was as historically accurate as possible. This attention to detail led to the purchase of a Bob Hope G.I. Joe doll, her most costly doll purchase to date.

Parker says that planning the next window generally begins in January, or as soon as the next parade theme is announced. This allows her time for any construction to be completed or additional items purchased. Setting up the display generally begins in November, with the reveal always happening in time for the annual Rusk Christmas parade. Some plans for future windows include a parade, complete with marching band, and possibly animatronics.

“As long as people are enjoying the Barbie window, I will continue doing it,” Parker says.

In the past 11 years, she says there was only one year where she was struggling with getting the display up, and even thought about not doing it. However, something happened while in line at the grocery store that changed her mind.

“I was talking to a cashier about the window,” begins Parker, “when the lady behind me in line picked up that we were discussing the Barbie window. The lady told me how much she loved the display and that she took her granddaughter to see it every year.

“Hearing that gave me the push I needed to finish the window. I love that what I see as a fun hobby, has turned into a tradition for some. I hope those traditions turn into lifelong memories that will be cherished.”

Chapman’s Pharmacy is located at 108 E. Fifth St., Rusk and the display will be available until after the beginning of 2019.