Lighting up the holidays, Hughes style

by By Cristin Parker news@mediactr.com 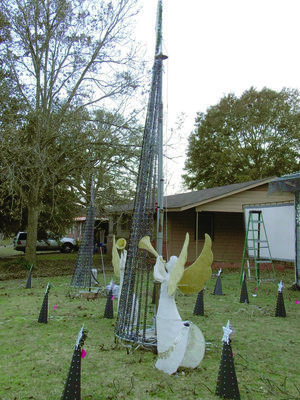 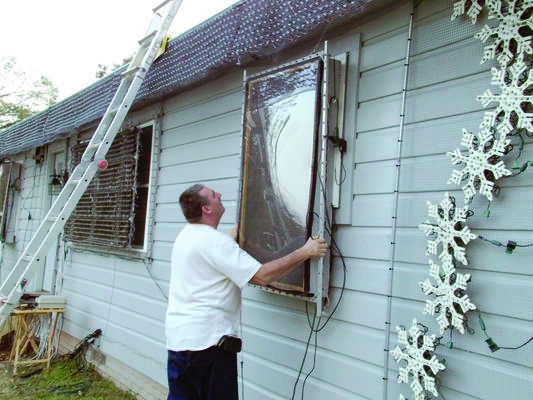 Forget about putting a candle in the window for Christmas.

“Every year, when we do our introductions at the beginning of the school year, I tell my students that it’s my house with all the Christmas lights,” Phylena said. “They all get really excited about it, and say they’ve been by to see them.”

The Rusk couple are again pulling out all the stops in decorating their yard for Christmas – and using the latest technology to do so.

“When we started this, we had four strings of different colored lights on each of the 32 mini trees,” Stephen Hughes recalled. “They were just plain old LED lights that each lit up in one color. Now those trees are made up of pixels.”

A pixel, Stephen explained, is a single bulb that is fully controllable, so each light on the string can be any color at any time.

“Each bulb can change to any of 2 million colors independently, at the same efficiency as any LED -- that’s what I’m talking about,” Stephen exclaimed.

Phylena added, “We turned them all on to test them out, once he got them all connected and it was so bright, we couldn’t even look outside. It was crazy.”

The Hughes’ lighting show takes place every evening through the month of December, in their front yard, at 189 N. Easy Street, just off U.S. Highway 84 W in Rusk. Visitors can drive past the address and tune their car radios to 94.3 to hear the music to which the lights are dancing.

This year’s show includes 64 items spanning the yard and on the house including, the 6.5-foot tall star at the peak of the Hughes home’s roof; Christmas trees in various sizes; Christmas angels; arches; a pair of P-10 panels over the windows; and a light panel on the front of the house that can make icicles, lightning and more.

“We added the fire and snow machines a couple years ago, and they’ll both still be featured, too,” Stephen said.

Stephen said he’s added to the musical fare as well this year.

“I’m still doing Trans-Siberian Orchestra, some classics and all that, but I’ve added some dubstep and techno music too,” Stephen said. “It’s all got a beat – there are a couple of slower songs in each set, but for the most part, it’s music that makes