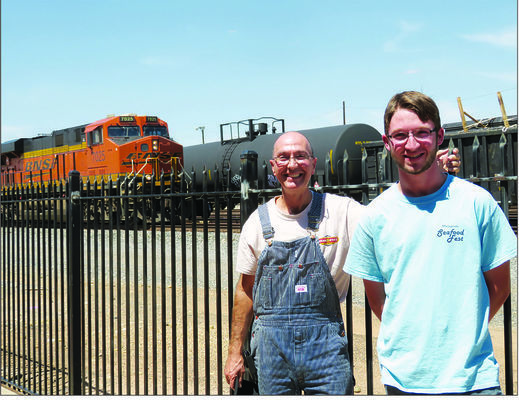 Young men and women with big dreams really excite me. This story is about an 18-year-old from East Texas staying at the Slaton Harvey House, who is following his dream. Aaron McCreight fell in love with railroading as a youngster. You see, the Texas State Railroad runs from Rusk to Palestine through the piney woods. The railroad was built in 1883, originally to transport raw materials to the iron smelter at the Rusk penitentiary.

The railroad operated freight and passenger service until 1921. It ceased operation in 1969, but it is now operating as a successful scenic railroad. The railroad has both steam and diesel locomotives and does both passenger and freight service.

Aaron began chasing trains with his family at age 10. The railroaders noticed him and gave him a chance to first work as a volunteer and later as an employee. He played the role of a hobo on the annual Polar Express. He was a waiter at age 15, who could balance a tray of beverages on a swaying train.

When he graduated from high school last May, the railroad offered Aaron a full-time job as a conductor. A high school counselor suggested that Aaron contact the Burlinton Northern Santa Fe Railroad in Lubbock. BNSF is the largest freight railroad in the U.S. It has 32,500 miles of track in 28 states. They own 8,000 locomotives. This is the company to work for.

Aaron passed the interview with flying colors. He is midway through a 13-week training course to become a BNSF conductor. He travels from Lubbock to Sweetwater, Amarillo and Clovis, N.M.

Most freight trains have a two-man crew. The engineer is responsible for driving the train. He must carefully monitor all mechanical conditions of the train and ensure the ride is safe and smooth. The conductor is the senior partner in charge of the train.

The conductor checks to be sure the train has the correct load and the cars are positioned correctly (hazardous freight away from the engine). During the journey, he plays a key role in ensuring the train operates safely and on time. His job ensures the cargo gets delivered exactly where it should be and safe operation always happens.

I asked Aaron, “What is your long term goal?” He replied, “I am living my dream. Railroading is my passion. I have been chasing trains since I was 12. I convinced my family to drive me to places like Cheyenne, Wyo., where I could see a classic Union Pacific steam engine, gliding down the track. I even made a calendar for my family that has photos of trains all over the U.S. I took the pictures myself. My folks are real happy that I have chosen this career.”

While Aaron is training, his grandfather, Dale Thibodeaux, is staying with him at the Harvey House. When Dale talks about Aaron, he breaks out in the biggest grin. One can see why.

-- by Ron Cox, reprinted from Sept. 20 issue of the The Slatonite