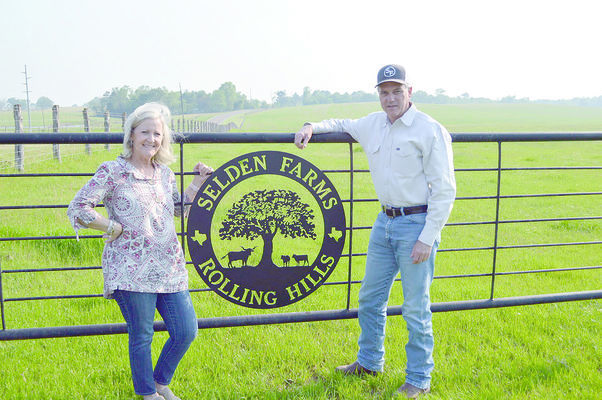 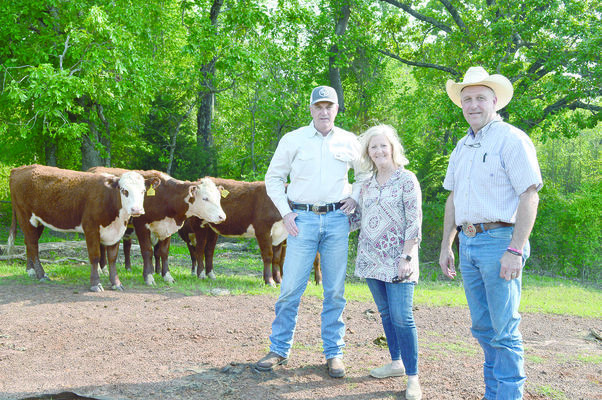 Bryan and Sarah Selden (left) will be recognized by Preston Lindsey (right), director of zone 1 of the Cherokee County Soil &amp; Water Conservation District, for Land Reclamation and Cattle Production at the annual awards banquet May 4 in Jacksonville. 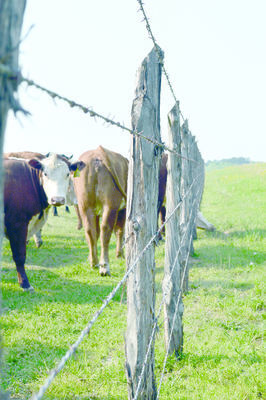 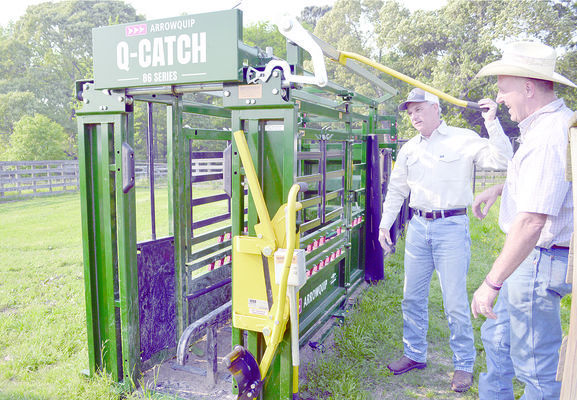 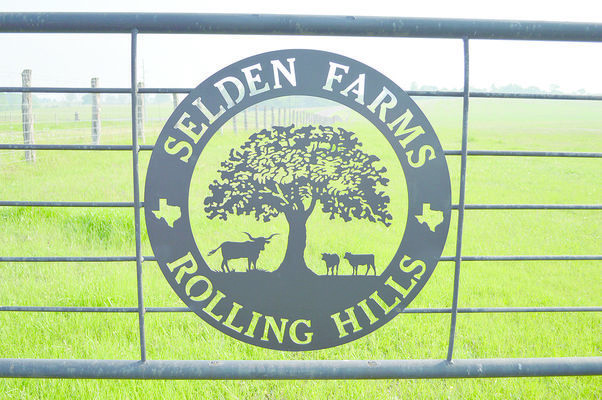 “They say the longest journey begins with a single step; well, if that’s so, then we’re about 3 steps into it,” said Bryan Selden of Selden Farms Rolling Hills.
Mr. Selden and his wife, Sarah, have been actively engaged the past three years in reclaiming a piece of property in the northeastern portion of the county which he found online on the Lands of Texas website.
“It was providential that we found this land. We wanted to raise cows and had looked at other places. You can plant grass anywhere but you can’t make a hill and the topography of this place with the creeks and water; and we could see that the soil was fertile too,” said Mr. Selden.

When they bought the 262 acre place about three years ago, there was no grass but it was head high in brush and weeds. He said, “From what everybody tells me, this place used to be a beautiful place but it fell into disrepair. The first thing to do was get it back to grass we could put cows on.”

Preston Lindsey, director of zone 1 of the Cherokee County Soil & Water Conservation District, has chosen to recognize the Seldens at this year’s awards banquet, as Outstanding Conservationists in Land Reclamation and Cattle Production.
Mr. Lindsey said, “I grew up in this area and that place – Rolling Hills – was active all my life with cattle. Then the owner passed and it changed hands and deteriorated over the years. The grass died, the fences fell and brush grew up. I was so excited to see someone come in and take an interest and bring life back to this place and restore it like the Seldens have.”

The Rolling Hills, located not far from Love’s Lookout, is planted in coastal, some with jigs. When Mr. Selden began his reclamation project, the first action was to deep mow and clean out existing brush and weeds.

Once the bare soil was mostly visible, the soil was tested and the NRCS (Natural Resources Conservation Service) soil conservationist helped guide them through the sprigging process. The front pasture still had about 50% coastal in places but the back pastures were mostly weeds so they were completely sprigged. The first two-thirds of the pastures were done two years ago and the rest last year.

Fences are still being repaired and new cross fences installed. Lime and chicken litter fertilize were applied and some coastal grass from years ago began to thrive again.
After overseeding and light grazing, 200 rolls of hay were cut off the front pasture last season. An additional 164 acres is leased for pasture which adjoins the property in the back.

The Seldens currently run 72 registered Hereford cows and are beginning a high quality replacement heifer operation. Their plan is to raise Golden Certified F-1 Brafords which are a cross between a Hereford bull and a Brahman cow. Certified means both parents are registered but of different breeds.
Mr. Selden said, “You get a tiger stripe cow. You get hybrid vigor when you do that. We had been running tiger stripes but decided instead we wanted to raise tiger stripes. We went around and picked some really good Hereford heifers from reputable breeders and ordered AI (artificial insemination) from a reserve national champion bull out of V8 Ranch in south Texas, a premier Brahman breeder.”

The lake currently on the property was choked with undergrowth and inaccessible. In addition to repairing the existing dam and clearing around the lake, a second lake of 10 - 12 acres is in the planning phase.
One of the spring fed creeks will be damned to create the lake for livestock and recreation purposes and access lanes will be cleared. A low levee water control structure will be installed in an area which will be planted, then flooded and drained as needed to attract waterfowl.
Mr. Selden raised cattle in FFA at Hearne High School but mostly learned from his family growing up – an almost ubiquitous characteristic among cattle raisers.
He met Sarah at Sam Houston and has had a career in business, but has returned to agriculture.
He said, “Now, after our children are grown, this is our golf; instead of traveling, we like to come out here and work.”

The Seldens are doing their part to ensure sustainable agriculture. All three grown children help out in some way in the operation. Daughter Elizabeth, son Matthew and youngest daughter Mary Caroline all have a part in the business.
The five grandchildren all happily help feed the cows and enjoy driving the (motorized) mule around the pasture.
Mr. Selden said, “Our greatest hope is that the children will keep this place and we are doing our best to make that possible.”

The Seldens do not currently live on the property but have already staked out the spot where they will build and be able to look out over their cattle and land every morning.
The awards banquet will be held at the Norman Activity Center in Jacksonville at 6:30 May 4. Tickets are $10.50. The public is welcome.